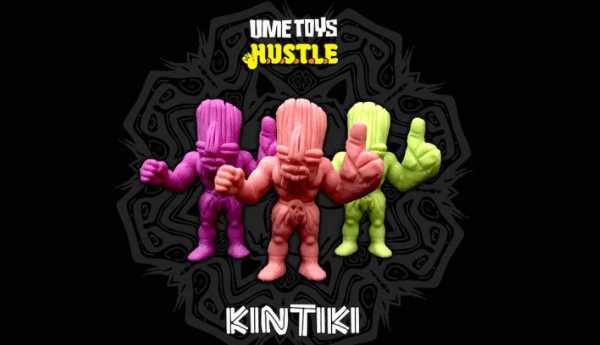 We are very proud to reveal that UME Toys’ long lost “KinTiki” H.U.S.T.L.E mini figure will finally be receiving it’s first release next week! Originally created alongside fellow H.U.S.T.L.E design Martin Hairybottom for ToyCon ’13, the custom bootleg M.U.S.C.L.E – kit-bashed and re-sculpted by UME’s Richard Page based on his classic Tiki designs – recently resurfaced at the Disart ToyLabs studio amongst a few other neglected figures that’ll be seeing the light of day later in the year.

Produced by H.U.S.T.L.E-creator Tru:Tek in a multitude of different colored UV resistant rubber, KinTiki will be touching down in the Man-E-Toys store on THURSDAY, MARCH 26TH AT 9PM LONDON TIME alongside a few other soon-to-be-revealed surprises for just $12 (around £8) plus shipping.