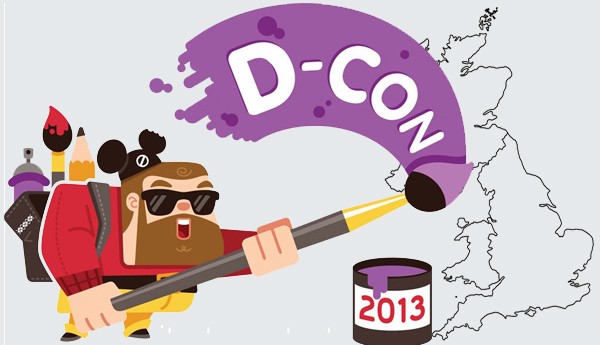 With DesignerCon (DCon) just around the corner (November 9th & 10th) we here at The Toy Chronicle thought we’d take a look at some of the UK artists that are planning to ensure their art pieces take DCon by storm. It should be noted that the storm that’s heading DCon’s way is surely going to be on a more epic scale than the ‘Great Storm of 2013’ the UK has just experienced!

Anyways, it’s a great time to be a UK artist in the designer world right now, there is so much variation & talent around – and it can be seen in the artists work for DCon that we’re going to go through now.

First up we have Lisa Rae Hansen of ibreaktoys fame. It seems wherever you look right now you’ll see Lisa’s name pop up – and for a good reason – Lisa puts out some tremendous pieces of work. It’s for this reason that the likes of both Dragatomi & Trampt will be showcasing Lisa’s work during DCon. Lisa will have 11 pieces on show altogether – 6 with Trampt and 5 MegaSeth’s with Dragatomi.

MegaSeth available at Dragatomi (Booth 300). These will cost $60 & each one comes with an A5 print. Two variants of Babycakes, with packaging, available at the Trampt booth. Each piece will cost $60.

Two variants of the Way Cool BadBoys, available at the Trampt booth. Each will cost $50. Another highly talented artist that will be part of the Hustle & Hype show at DCon is Haus of Boz. I can assure you the hype is real with Haus of Boz. From the North of England (the best part of England, obviously!), HoB has a definite cute style of customising – as you can clearly see on the Pretty Deadly piece for DCon. Pretty Deadly is an 8″ Hand-sculpted Dunny using polymer & acrylic. The level of detail & effort gone in to this piece is insane – right?! Pretty Deadly by Haus of Boz – part of the Hustle & Hype show @ DCon. Pretty Deadly will be available at $300.

Also as part of the Hustle & Hype show will be A Little Stranger, although she is no stranger to the UK scene – as A Little Stranger (Holly Stanway) is also the creator of Hey Cavey, founder of Astral Foundry and is heavily involved in ToyCon UK! A busy bee in the UK scene. A Little Stranger has a custom 8″ Cat Qee from Toy2R piece in the Hustle & Hype show – Enjoy the Silence. Enjoy the Silence is hand-cast resin face from my original sculpt, with a faux fur, hand-trimmed body. A second piece by A Little Stranger will be in the DKE Toys presents “The 99 Deaths of Jar Jar” – Chef Vader’s Homestyle Jar Jar Burgers! Chef Vader’s Hometyle Jar Jar Burgers is a black and white, pen and ink illustration on an 8.5 x 11 sheet of paper and chose one way to maim, torture, and/or kill our least favourite Gungan. Finally, A Little Stranger also has a Hey Cavey DCon Exclusive, that we mentioned earlier today in our Hey Cavey Exclusive round-up. A green vinyl Cavey will be released at the Dragatomi booth (Booth 300). Chef Vader’s Homestyle Jar Jar Burgers – for the DKE Toys ‘The 99 Deaths of Jar Jar” show. The print will be available for $50. Enjoy the Silence for the Hustle & Hype show. Available for $300.

Another great addition to the DCon show from the UK shores is from Blue Frog. Blue Frog will be doing a series of 8 of his ‘Blue-Frog World Resin Head Lunartik Tea’s’. These custom Lunartik Tea’s will be on sale at the Vinyl Thoughts booth 830 for the price of $45 each. The Red & Yellow teas are DCon exclusives! Going back to the Hustle & Hype show, where it seems that the UK scene is getting a great push – thanks should go to @Trampt for putting on the show! So on to the artist, Squink! He’ll be releasing Silencio, a 3″ custom Dunny. Hand-sculpted resin head and vinyl body. Painted with acrylics. Silencio by Squink. For the Hustle & Hype show. Available for $115.

Finally, he doesn’t need any introductions, JPK – who The Toy Chronicle interviewed this week – will be releasing a DCon Collector Coin. Photos are scarse at the minute, but there is a small image on the DCon website. *If you’re looking for more information on Hustle & Hype show – head over to their site here.

*DCon has been running since 2009, although it goes as far back as 2006 where it was previously known as Vinyl Toy Network . DCon is hosted in Pasadena, CA*