Only a week ago I was in London visiting the most awesome designer toy convention in Europe: ToyCon UK. I’ve been to ToyCon every single year and it never disappoints. All the artists are super friendly, they bring amazing artwork and it’s really nice to meet fellow collectors who you’ve followed on Instagram for quite some time.

Like every year there were plenty of awesome toys to be seen, including ToyCon UK’s very own mascot: ToyConosaurus aka T-Con. Rocket Lolly was one of this year’s new editions. At 10 inches tall, it was like looking at a giant dinosaur sorbet.

If that wasn’t enough, a new 4,5” clear rainbow T-Con saw the light as well. Pictures really don’t do it justice. It’s so pretty in real life!

There were some golden oldies to be bought as well for all the GID lovers out there. At both 4,5” and 10” these two make a lovely glowing pair.

If you were paying attention closely there was also an unpainted T-Con to be found. I was lucky enough to have a collector friend of mine spot it (thanks Craig!) and am now the proud owner of this clear pink glittery beauty. Love it!

And if you didn’t bring a bag to carry all your purchases, you could get your own cool tote bag.

I’m already looking forward to next year’s T-Con releases, but for now, let’s focus on all the great artists that brought their work to ToyCon 2019 first. Keep an eye out for more blogs about ToyCon, because I’m just warming up! 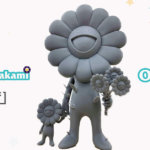 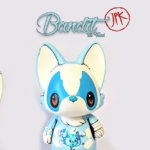