Ofcourse there can’t be a part I without a part II, so get comfortable and check out another group of wonderful exhibitors that showed fantastic toys and art at ToyCon UK!

Today’s blog starts with Dabomb Toys who seriously brought amazing toys. I particularly liked Baby Abyss, a beautifully coloured pyramid with eyes and tentacles by Liege Toys. The other toys had great details and colours as well, ranging from ABS-01 eyeball men to OBJT custom Tokyos and other cool monsters. Dabomb Toys definitely had a booth to look out for!

Kerry Dyer and Okkle shared a booth and they both brought lovely work. Kerry had a few super detailed GID animal skeletons which I really liked and also brought some adorable cactuses. Look at that grumpy face! There were several kinds of yetis available aswell and if that wasn’t enough you could find some cool badges, magnets and hangers at Kerry’s booth too.

Okkle’s work is super cute and colourful, what’s not to like about that? He had a whole lot of adorable 3D pieces available and they all put a smile on my face. From pretty birds to sweet bunnies, bat pigs and other lovely creatures, it’s always a delight to see Okkle’s work at ToyCon.

PureSauceInk had a very clean booth with a few distinctive pieces including Blueberry Jam and Hot Sauce. The colours really popped and both Jam and Sauce came in a nice box. Red Riding Hood stole the show though. Great details on the figure itself and that bike wasn’t too shabby either! Will be interesting to see what PureSauceInk will come up with next.

Emelie Jensen (also known as Tomodachi Island) seriously brought way too many cool pieces. I loved them all. Super adorable, but not just that, the details on them were fantastic too. Gorgeous 3″ and 8″ Dunny customs including unicorns (UNICORNS! O:) ), custom Omens and a Night King, Sunrise and Sky Blue Cloud Nimbuses, the whole booth was filled with beautiful mystical creatures. Another fun addition was Sank Toys‘ red Cube Dolphin. Overall a great booth!

I’ve said it before, but I will say it again: I love all things cute and colourful. And Cave Critters didn’t just bring cute and colourful pieces, they were fluffy too! I simply adored all of them and it was extremely difficult not to take some of the bigger pieces home. I did end up with three cute pinkish Worry Sprites and can’t guarantee they won’t be joined by some big brothers one day. I really hope the pictures do all these wonderful creatures justice.

JPK and Tim Clarke also didn’t disappoint with all the great stuff they brought to ToyCon. I was a big fan of Pistil Dama, a handpainted and partially sculpted 3″ Dunny with a pink flower surrounding it’s skull, and The Hierophant and Steed. To be honest though, JPK always brings insanely detailed and beautiful work. But I also have to admit something, Tim really stole my heart when he showed me how his handpuppets work (sorry JPK!). He brought Sherlock Bones and Doi the bird to life and I should totally have filmed it, but I didn’t so you just have to imagine how cool and fun that was by looking at the pictures. Oh and don’t forget to check out Tim’s Boglins!

Alright folks, that’s it for today. But worry not, there are still more great exhibitors left for a blog or two! 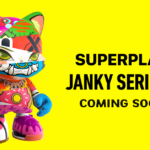 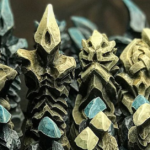