ToyCon UK, ofcourse, has many UK exhibitors, but don’t be fooled by the name! In 2019 around 20% of the exhibitors came from outside of the UK. And it didn’t just stop at the European border, even Asia was represented!

Okay, technically Dolly Oblong is partially UK now, living in the beautiful capital and all, but with their Dutch as fluent as ever and their popularity going through the roof I couldn’t leave Dolly of this list. Five minutes after the doors opened there was a line of at least 15 people, including fans who came all the way from the United States, to obtain some of Dolly Oblong’s adorable resin bunnies. Thankfully for my blood pressure I wasn’t after one of those this time and was super happy to buy one of their adorable plushies instead. Still in love with it <3.

On the left of Dolly Oblong was Martian Toys who hosted the fantastic art show NESS is MORE which featured many amazing artists. They all gave their own spin on the theme which made it really fun to check out all the different pieces. Ofcourse Martian Toys also brought their fine share of vinyl toys and blind boxes including Jaspar. I totally told myself not to add yet another platform to my ever growing collection, but I was lucky enough to get the Doktor A Jaspar and don’t regret it one single bit. It’s a fun toy to look at and the paint job is spot on. The other designs looked great in person too so to be honest I can’t wait for more designs to be added to the Jaspar series!

Martian Toys was joined by The 3D Hero (who got a really cool T-Con tattoo btw). He brought a wide range of customised toys and his own original character BrightStar who was available in different shapes and sizes including the Battle Minis, BrightStar helmets and Nano Stars Varsity. As a Dunny collector those customs were my favourite, but I really liked the whole vibe and overall look of all the characters.

Another artist who came all the way from the USA was Concrete Jungle and I’m very glad he did! His work is super detailed and the characters are really interesting. Added bonus points for Frank Symbiote who has an alternate replacable head. Therefore he might be my favourite, but I also loved Markneto, Blue Flowers and Czarface. Basically, they’re all super cool toys and you need to keep an eye out for future releases!

Next to Concrete Jungle, toy designer Mike Wynter joined us all the way from Mexico with a custom show including the designs of many different artists, I especially liked the customs that were decorated with flowers and bright colours, but to be honest, there was something for everyone.

A little closer to home, Karmieh Designer Toys from Romania shared his booth with 2Petalrose. Although their styles differ, I thought they complimented each other nicely. Karmieh’s Hellbaby definitely gave me nightmares (in a positive way) and his character Foxpresso looked really clean. Hard to pick a favourite colourway for him as they both work well so you can take a look at the photos and try to decide for yourself. 2Petalrose also made it hard to pick a favourite with his insanely detailed pieces that sold out in a heartbeat, but his custom skullface Kit Katana figures are probably the ones that I’d go for.

Our international friends without a doubt brought amazing work to ToyCon UK and I hope we can welcome them again next year!

If you’ve paid close attention you might have noticed I haven’t included all international exhibitors in this blog post. And that’s because I will dedicate part II of ‘ToyCon: UK and beyond’ to them. So fear not, I will do my best to showcase all the great artists that came to ToyCon UK from far away (and not so far away) lands. 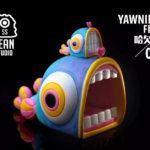 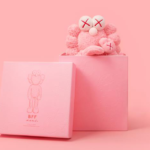