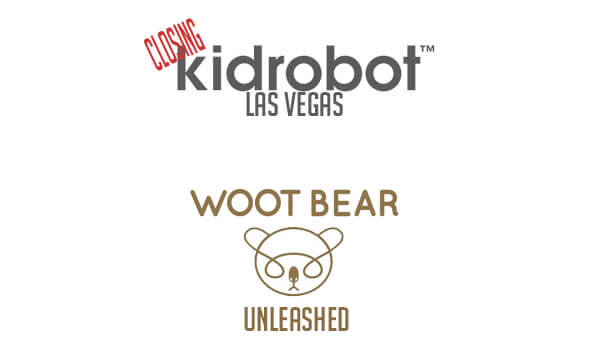 Everything comes to end sooner or later, right? Kidrobot Las Vegas which is owned by Cosmopolitan hotel and Kidrobot San Francisco which is owned by Woot Bear are the two franchise retail spots that are making some big changes. Leaving Kidrobot without a physical store. One has to ask, does this still matter as we have a few independent brick and mortar stores and plenty of online retailers. Hold on… it’s not darkness for physical stores as Woot Bear go from strength to strength, and now such a recognisable brand of their own that they’re now about to stand alone without the KRSF moniker ever since they moved in since March in the same location and now take over entire retail space.

Not much is known about what will be replacing Kidrobot Las Vegas store, but as for Kidrobot San Francisco will be fully Woot Bear Gallery and will continue to stock Kidrobot and many more art collectables. Plus all those cool release parties and gallery shows. Like JP Neang & Candie Bolton show KAMIKAKUSHI – “Walking With Spirits” thats happening TODAY.

“When one door closes another one opens”

One question, do big brands need retail space to make a presence? or is that old fashioned thinking? Brands like Tokodoki and Super7 have retail spaces. Do collectors actually care?

If you’re into the old classic Kidrobot Kidrobot Mascot Bot then look out for an exciting announcement in the next few month. #Justsaying.