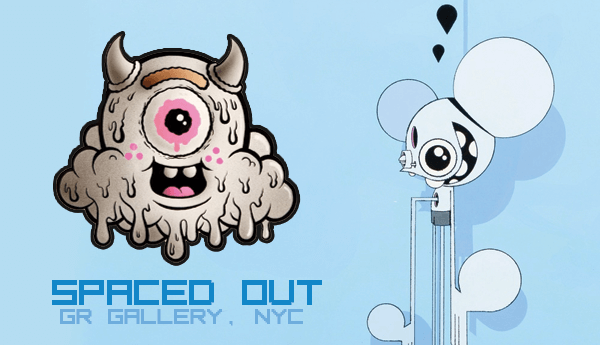 If you’re planning a trip to NYC in March (or if you’re lucky enough to live in the vicinity of Manhattan), you should make plans to visit the GR Gallery (255 Bowery, New York – NY, 10002) where you’ll be able to pleasure your eyeballs with the art of not one but TWO great iconic street artists. Dalek and Buff Monster are teaming up next month to raise merry hell in the Lower East Side! 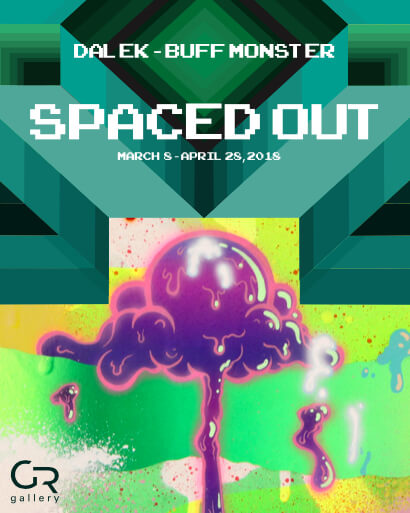 Running from 8th March through to 28th April, you’ll have plenty of time to pop into GR Gallery and see this double-solo exhibition. This will be the first time that both artists unite in the same exhibition. The show will reveal sixteen fresh artworks including paintings, editions and installations, expressly created for this occurrence and designed to throw the visitor into a psychedelic cosmos defined by mysterious characters and mazy colourful shapes.

A little word from GR Gallery…

SPACED OUT aims to investigate and juxtapose the latest artistic output of two internationally known and brilliant whizzes, who not only share an affinity for Street Art and New Pop Culture but are also deeply connected through a witty and cutting-edge visual aesthetic. Through the invention of odd and intriguing characters, that by now become popular icons of the contemporary urban imagery, and the use of colourful and distinguished shapes, they are creating a stylish visionary world as a medium to depict today’s society, bringing to the next level the concept of Street Culture. Marshall’s alter ego is the Space Monkey, a character through which he expresses his emotions and ideas, interpreting his concept of a human being lost in a growing sea of technology and convenience. While Buff’s delivers his vision of the world through captivating, typographic and apparently happy characters, living in bubbly landscapes, which delights us with their playful imagination and creative energy.

The artists have known each other for a long time and reciprocally appreciated each other’s creations, but they never had the chance to exhibit together until now. For their first collaborative show, they chose NYC and, more specifically, the Bowery, an iconic spot for exploring the boundaries of Street Art and to get engaged in a conversation that leads to the creation of a new urban spirit.
For this groovy new project, they are preparing an astonishing design planning, uncovering an unanticipated visual layout that will reinvent completely the art gallery space and will strongly disorient and surprise the viewer, hurling him into a funky and profound dimension.

Spaced Out will start its exhibition itinerary by displaying a couple of unavoidable models of Buff Monster’s and Dalek’s supreme creations, to quickly move towards a new and more unusual body of artworks, appositely conceived to match each other’s style and the slant of the show.
In addition to the reported plan, the artists will work in symbiosis to produce a collaborative mural on the walls of GR gallery, manufactured in association specifically for this event.