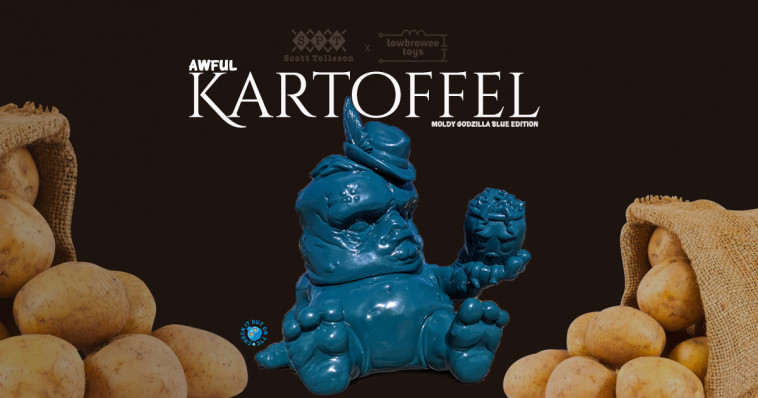 To the realm of Scott Tolleson’s food-inspired kaiju, we are now introducing a new Japan-made sofubi: Awful Kartoffel!, Co-created and produced by Lowbrowee Toys (Yaniv Brick).  This grumpy Bavarian tuber, together with his bitter partner, Sour Kraut, will do anything to avoid Oktoberfest events!

Awful Kartoffel is almost 5inches tall. It has three points of articulation and comes in two interchangeable forms – one with Kraut fixed to his hand and the other with his arm resting and Kraut as a stand alone 1.5inches tall finger puppet – it’s 2 toys in 1!

In the warm days of mid- to late summer

Kartoffel is always a bummer.

In that season he’s typically lazy,

but this time it drove Kraut extra krazy.

“Oktober is already near!

We’ll be stuck among pretzels and beer!

It’s our last chance this year to have fun.

This is not a whim, don’t get me wrong,

I’ve been wanting to go all year long.

I have already called us an Über.

The park’s perfect for you – you’re a tuber!”

But Kartoffel won’t bother to move.

Salt and gravy have stolen his groove.

Not excited for tube chutes and thrill,

When to Kraut’s mind came strudels and wieners

at those long-ass Oktoberfest dinners,

with the drunk-singing under the tent,

she could no longer sit and ferment.

As her patience was finally lost

she resorted to what he hates most:

“So you don’t want to play in the sun?

“Oh no, Kraut! Stop the poking! That tickles!

Can’t you go with your other friend – Pickles?!”

And with laughter that brought him to tears

he confessed all his waterslide fears.

“Ah! The rides in the park make you scared!

Don’t you worry, my friend, we are paired.

At the bottom or top of each slide,

it will be us together, two sides!”

The debut colorway, Moldy Kartoffel, is Godzilla blue and is very limited. Sold at $60 a pop + shipping, these will drop this coming Friday April 30th at 10AM PDT from stolleart.com (and get shipped early May). 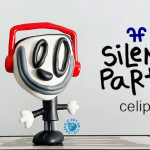