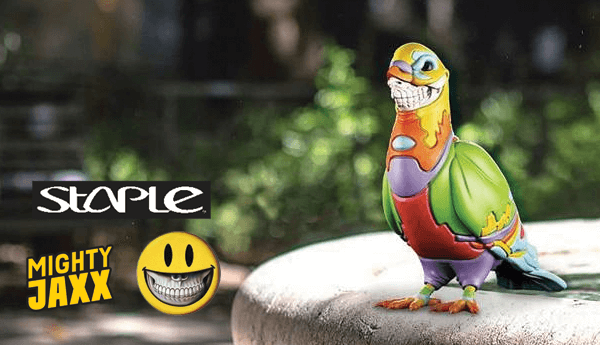 As we mentioned earlier this week, Mighty Jaxx have been working closely with Ron English & Jeff Staple to mix their two iconic styles to give you the badass Pigeon Skull Grin* Joseph and his Technicolor Dreamcoat ain’t got shit on this Pigeon Skull Grin though. Look at all those damn colours going on! Based on the information we syphoned from Pock Toys we estimated that Pigeon Skull Grin to be about $126/£97 ish. Certain a good price for such a collaboration. Dropping at 3pm BST tomorrow (10am EST) over on the Mighty Jaxx store HERE. Limited to 200 pieces. TWO HUNDRED PIGEON SKULL GRINS! *Pigeon Skull Grin is not the name given by Mighty Jaxx. Just something we decided upon after a beer or three earlier this evening.