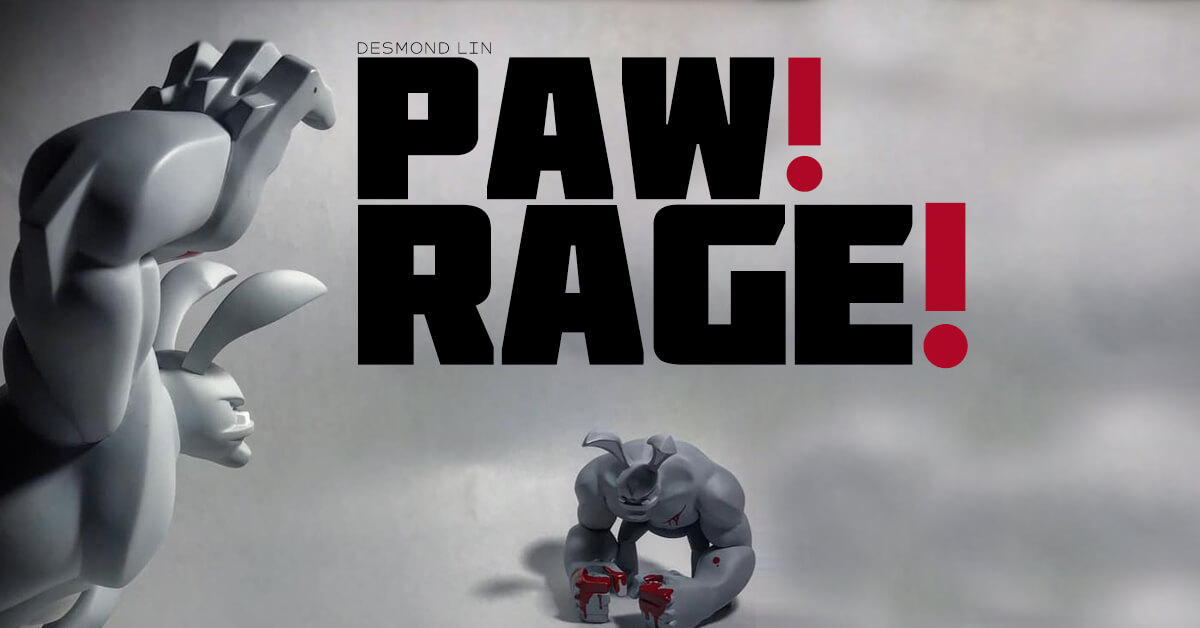 Singapore based Desmond Lin has COARSEheads talking after fellow COARSE Head Jason Mathis uploaded the shots of PAW! RAGE! the custom COARSE PAW! to Coarseheads. Jaws dropped, saliva wiped… blood will be spilled if collectors want a PAW! RAGE! Fan Art made by Desmond Lin only 5 made in full resin. The little PAW! RAGE! has a power pose which would make HULK look like a pussy cat, HA.

A little back story:
A few years ago when I started collecting coarse, False Friend was the one that caught my attention, I enjoyed the story behinds it and how that 2 character fits the story seamlessly. I remembered paying for my first <Loser> edition for a huge portion of my salary
:O Ha!

So after collecting for a while, I had this little vision that how wonderful it will be if we could see the later story of False Friend after paw! found out that Noop wasn’t one of his kind. If you didn’t know the story, here’s it:

Silence, yes. paw! won’t ask a question, but…He tugs on the ears. He lifts the sleeves. He pulls down the zipper…A noop.It was a noop all along.paw! howls into the elastomer.Noop’s smirk falls, and he bows his head. “Do you forgive me?” he asks.paw! takes a step toward noop, fists tight, jaw clenched, chest puffed.You’re my best friend,” noop sings. “Won’t you please forgive me?”
So I have this crazy vision that I want to express paw!’s anger, his emotion after being betrayed when he trusted Noop without any questions, that explains why I decided to use this pose for paw!, with his hand dips in fresh blood, what did he do to Noop? Or did he injure himself after slamming his arms on the ground? That’s for you to interpret if he did forgive Noop.
After all, thank you all who helped and advised on this project and thank you all who enjoys it! I was worried at first on how the world will perceive this vision of mine but thankfully you guys are kind!
At the moment there is no intention of making anymore as I felt a good toy isn’t about making 89721736 colorways of the same sculpt, but a good form, shape, color, texture that helps convey the message and emotions to the one that collects it. – Desmond Lin

Got to hand it to Desmond, we dig the pose. Obviously, if you look closer there are some telltale signs that it’s not an official COARSE release as COARSE wouldn’t add so much blood and some of the proportions, but PAW! RAGE! really made us blink twice to see it was a production from COARSE or not. Although smaller then the original PAW, you can see the COARSE resemblance, Desmond has killed it with this! Hats off to you sir. We are sure Desmond is getting hit with requests, HA. Like Desmond states, its a FAN Made, time to go knocking on COARSE door to bring back the PAW?

Before you leave us, check our Desmond’s fantastic art toy photography below. WOW.