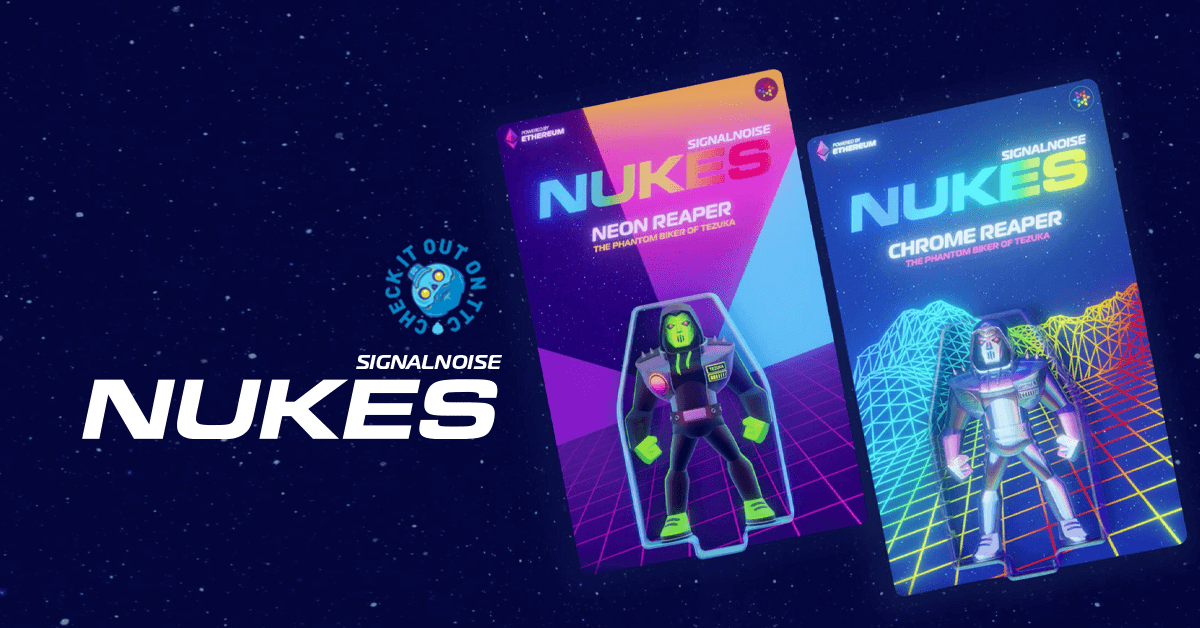 Hey, so we have all probably heard of the term NFT at the moment in time. All the rage at the minute. Every where you peek on social media, someone is talking about the pros & cons of these ‘non-fungible tokens’. We have spoken about it too on our Something about Designer Toys episode (watch HERE on Youtube), and we think there are three gripes with the new wave of NFT. The impact on the environment, the prices that NFT are selling for and there is no tangible product to hold, it’s just a digital image on a server.

The environment issue, I think is a wider issue that deserves a larger discussion but we have seen that companies & artists are (as well as us at TTC) have started to donate to companies like Ecologi that fund projects to offset the carbon footprint of activities that we all partake in (or certainly did when we could fly around the world etc). It might not be perfect but it’s a positive step of being active in our actions.

Pricing has always been a point of discussion, regardless of whether we are talking NFT or physical art. I don’t think we are going to ever fully agree with pricing. Art is worth what you feel it is worth and what paying customers are willing to pay.

The third point of tangible, physical art that can be brought into contact with your physical being has been something that we touched upon in the aforementioned Something about Designer Toys episode, where we spoke about the CryptoKitty by CryptoKaiju figure (watch HERE).

Today, we want to bring you news that has a strong focus on the third aspect from our points above – tangible art that mix into the NFT world. Meet NUKES by Signalnoise!

The Neon Reaper NUKES by Signalnoise has been building up a head of steam in recent times, as James (Signalnoise) has been orchestrating the perfect social media campaign towards the launch of NUKES this week. This ain’t no fly-by-night project either. James has been working on his art since the early 80’s when he was growing up on the likes of He-man, Star Wars, Transformers and wrestling.

NUKES is a multi-faceted release, where you have two physical releases. First, the Neon Reaper is a LE50 piece made from resin. Standing at 5.5inches. Each hand-painted with neon green paint and finished with a high-end automotive gloss finish. Neon Reaper comes in a non-damage slide-opening blister pack (so you ain’t damaging the backing card when you try to get your mitts on the Neon Reaper inside).

Neon Reaper will be sold via Known Original as an NFT and Physical toy for 2 ETH (currently around $3,315) from 6pm GMT on Friday 26th March. When you purchase the Neon Reaper, your NFT will be transferred to you & your Ethereum wallet. There will be a cooling off period, through to 9th April. This period will allow any reselling before anyone claims their physical resin 5.5″ Neon Reaper. The value is retained when both the NFT and the physical Neon Reaper remain with one owner. This cooling off period allows the market to settle, and ensure the physical Neon Reaper is shipped to the correct owner. For every Neon Reaper sold, Signalnoise will plant 1000 (one thousand) trees with Ecologi. Sell out 50 = 50,000 trees with Ecologi! Fucking HUGE!

Before we go into the second NFT + Physical release from Signalnoise, we caught up with James for a few words on the world of NFT and Neon Reaper. Some great insight from James. Check it….

With the surge in popularity of NFT, what are your thoughts on NFT and the future of this art form?

James: The future of NFTs is uncertain. Everyone has their version of how they think it will go… be it positive or negative, but nobody knows. Being a digital artist I see great potential in the medium but, like all new technology, it’s not perfect. It will take time to iron out the issues. But in the present moment, it’s interesting to see how the medium can be interacted with, and it’s opened the floodgates for a massive amount of digital and physical art. Will it last? Who knows… only time will tell.

Bringing the tangible and the non-fungible worlds together in the NUKES release, was this something that you had been planning for some time?

James: I haven’t really been planning it, no… but I’ve always felt a disconnect between the digital and physical realms. I’ve been creating digital art since 1995 and if that work wasn’t manifested physically in some way, like a poster or a t-shirt, the work would be buried on a hard-drive to gather digital dust. That’s problematic when you’re trying to earn a living creating digital art. So when cryptoart started to rise, to me, it felt like a bridge that’s never been there… where something, in theory, can exist in both realms. I’ve always wanted to create my own action figure but without a big investment up front, it was always out of reach. NFTs allowed me to explore a new way of creating a toy, and I felt it was worth a shot.

Who & what inspired NUKES?  Is there more to come?

James: The NUKES line of characters is heavily inspired by the toys I grew up with… namely Masters of the Universe and Teenage Mutant Ninja Turtles. I’ve been creating characters since I was a little kid, and I still have those drawings. So re-visiting those characters and breathing new life into their designs has been a real thrill. Are there more to come?… god, I hope so.

The second part of the NFT+Physical drop by Signalnoise is slightly different to the Neon Reaper, only ever so slightly but worth noting. Meet the Chrome Reaper!

We are super excited to see how these the Neon Reaper + Chrome Reaper perform during the drop on March 26th (6pm GMT on Known Origin).

Do NFT+Physical releases such as this with Signalnoise help with your questions regarding the new NFT phenomenon? Let us know on social media & comments below!