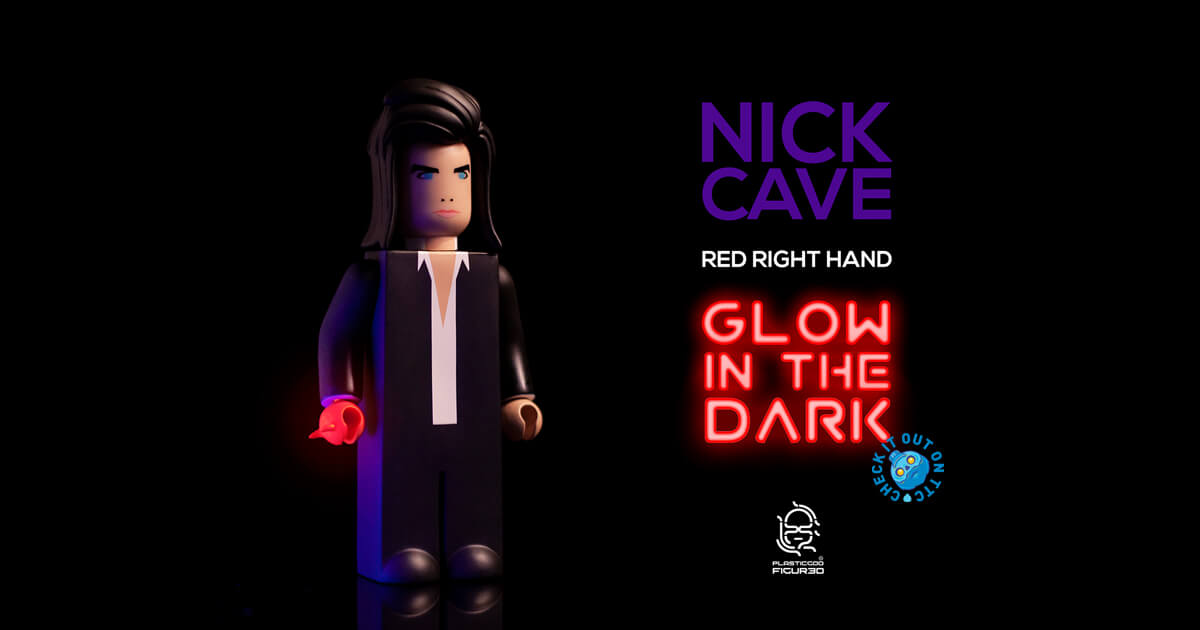 Today is the day! FLAMING HOT in here! NICK CAVE fans are you ready for some more NICK CAVE goodness?! Plasticgod® is the artist behind the introduction of the very first, six Nick Cave vinyl figures. After selling out the first six designs in a matter of hours. Nick Cave will be aglow this summer for his global streaming performance
“Idiot Prayer” at the Alexandra Palace in London. This limited edition, glowing Red Right Hand, officially licenced 6-inch figure can be yours even without SDCC.

Also in the virtual world, [email protected] 2020 from July 22-26, 2020, which is free and open to everybody due to Covid-19. As Cave’s popularity grows among old and new fans, pop culture artist/toy company Plasticgod® has created a custom-designed, collectable vinyl figure, showcasing the Nick Cave image, that goes on sale Friday, July 24, 2020.

Dressed in his classic tailored suit and buttoned-down white shirt, the officially licensed Red Right-Hand figure, with a “glow in the dark” red hand is part of the FIGUR3D® by Plasticgod® series of collectable, vinyl figures. “Loverman”, another figure in the Nick Cave collection, was released earlier this year. Red Right Hand is the latest offering among the other toy company’s creations that include, the Axis of Evil set and the MTV Music Awards Moon Man. Additionally, the Nick Cave series includes collectable vinyl figures representing his popular, chart-topping hits; Tupelo, Ship Song, Into Your Arms, and You Turn Me On.

As a limited edition of 500, glowing Red Right Hand, a 6-inch figure, will sell for $55 on
Plasticgod’s website www.plasticgod.com