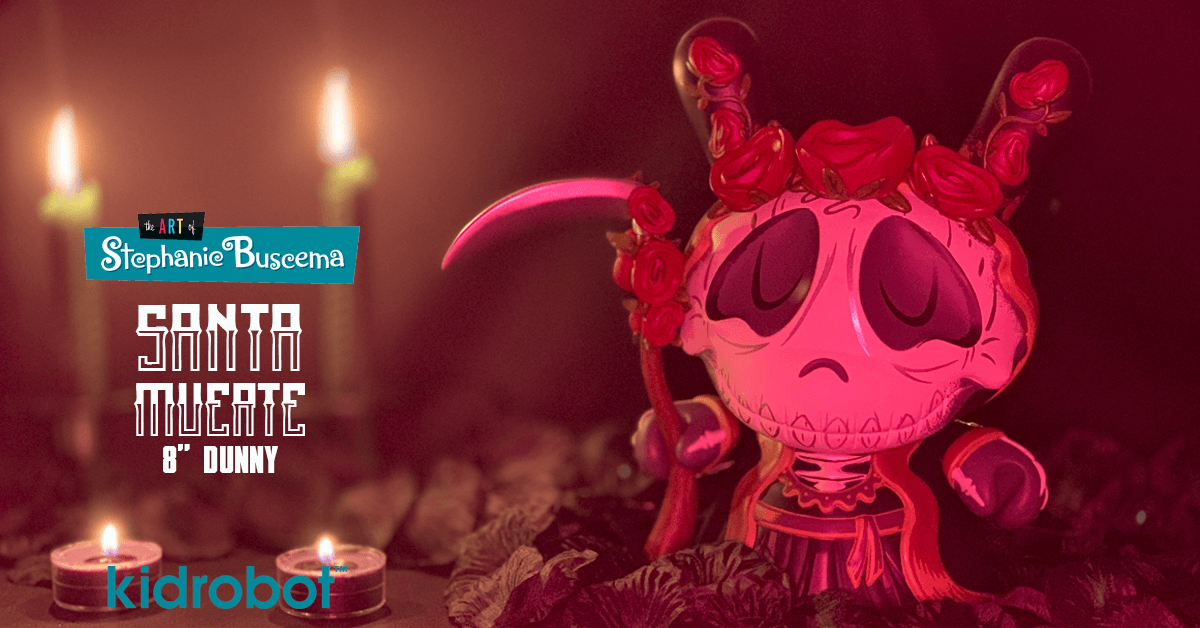 The Toy Chronicle was fortunate enough to be able to get our mitts on the new production Kidrobot Dunny by Stephanie Buscema. The Santa Muerte Dunny is a female deity. The personification of death, and associated with the safe delivery to the afterlife by her devotees.

Standing gloriously with her scythe at 8inches tall, Santa Muerte is a full-bodied Dunny (no legs) but some additional rose sculpting around the ears, head and scythe really make the the skull head pop.

The Santa Muerte 8 inch Kidrobot Dunny comes in at least two guaranteed colourways. Black (Protection) & Red (Love). With a potential Green edition that will be revealed in due course.

If we were to hazard a guess based on previous releases, the third Green colourway will be released by IamRetro (but this is guess work at this stage). Once we hear further details, we shall let you guys know.

Your usual Designer Toy friends at myplasticheart, Tenacious Toys, Mindzai, Strange Cat Toys and Martian Toys are likely to stock the Black retailer Santa Muerte Dunny edition, so be sure to check out those guys on Friday 13th September.

Stephanie’s work is bold, and by her own words, kitschy which on the design of the Santa Muerte Dunny it is evident. It’s garishly beautiful. Big, ol’ oversized features bring the fun & cartoon aspect to this design.

When Kidrobot asked Buscema why, out of all goddesses, she wanted to create an interpretation of “Santa Muerte” she replied simply “Because it’s Santa Muerte”.

Santa Muerte is a deity with many names. “Our Holy Mother of Death,” “Lady of Night,” “Lady of Shadows,” and “The Bony Lady” are just a few. She’s a highly revered deity in Mexico with millions of followers despite being condemned by the Catholic Church as “satanic” and misaligned with church teachings. Nevertheless, she persists.

“Santa Muerte’s openness, love and acceptance of all people who seek her aid inspired me to honor her,” says artist Stephanie Buscema.

The origins of Santa Muerte have been a topic of intense debate but despite her recent surge in popularity, the Bony Lady has been around for centuries – usually wearing a robe and usually holding a scythe. Most believe her existence to be the result of pre-Columbian Mesoamerican religion melding with colonial Spanish culture. Or more specifically, the combining of the Aztec goddess of death, Mictecacihuatl and the traditional Grim Reaper figure that Catholic missionaries had regarded as the embodiment of death.

In modern times, Santa Muerte is worshipped as a figure of protection and her representations are rich with symbolism. The scythe, for example, is often interpreted as a tool which cuts off negative energies or influences. Or, as a harvesting tool, might also symbolize hope and prosperity. It typically has a long handle, indicating that it can reach anywhere.

Our amateur photography trying to capture Santa Muerte in some different lighting. We have also tried to keep the below photos clear (we need to really build a photo box again but you know how much room those bad boys take up).