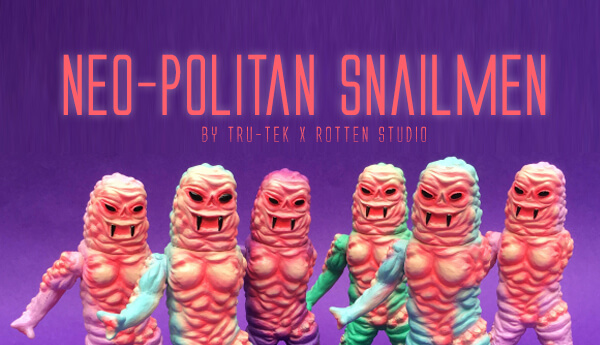 Our go to soft vinyl guy Tru-Tek, has given us the heads up for his latest release with Rotten Studio! Neo-Politan Snailmen is the latest crazy looking figure that would give a vampire a run for his money with those sharp ass fangs. Here’s Tru-Tek giving you guys the download on the Neo-Politan Snailmen. 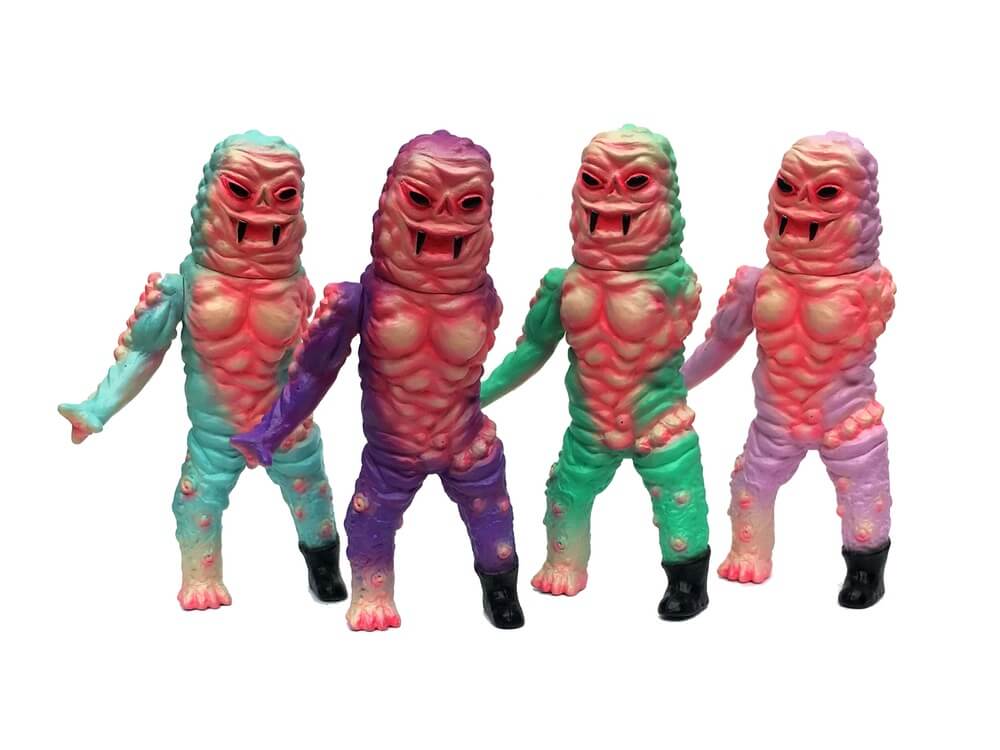 Tru:Tek has teamed up with Rotten Studio for a special run of “Neo-Politan” Snailmen! Standing at around 5.5? tall and featuring 2 points of articulation, these hideous creations have been produced in a mix of light blue and purple this time around, coming with layers of flesh and neon pink sprays over a selection of mint blue, lilac, purple and emerald green. 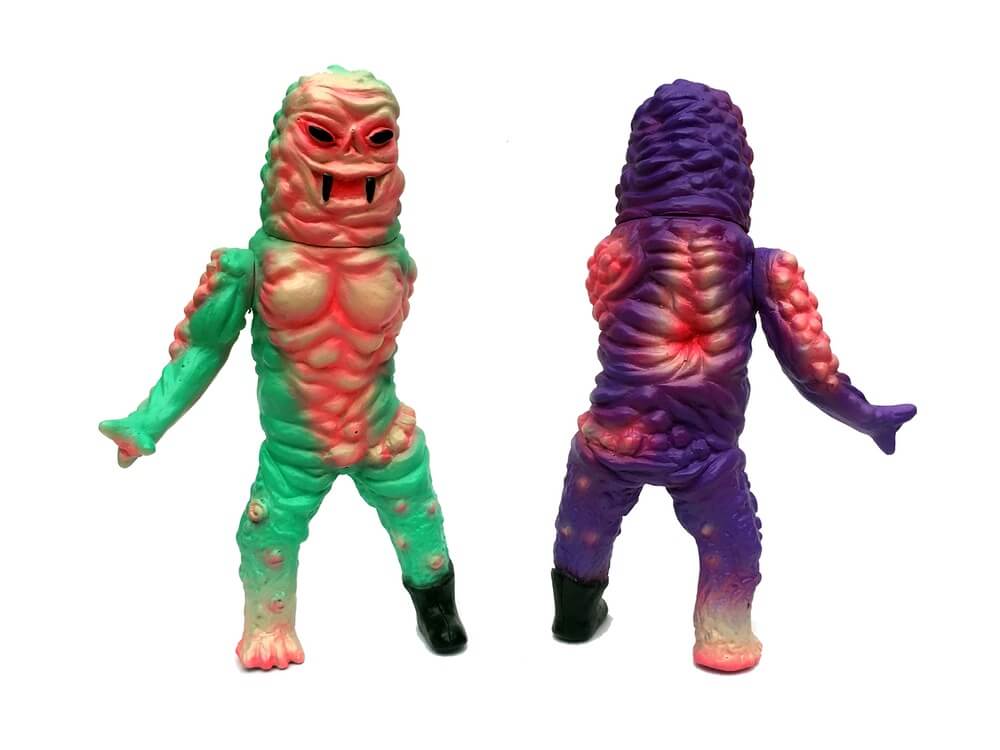 Limited to an edition of just 6 pieces at http://softoyhobby.bigcartel.com/ Sadly you’ll have to wait until 30th September to oder one as Tru-Tek has gone to JAPAN that lucky guy! don’t be jealous like us, we’re sure its for work and to bring you guys more soft vinyl releases. 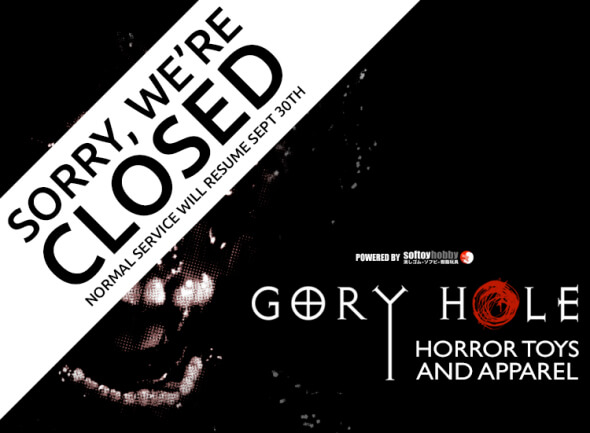 Hey guys! As some of my Instagram followers may be aware, I recently quit my day job to focus 100% on toys. Whilst this of course will mean I’ll be taking on more production commissions, creating more of my own sofubi and painting whatever comes my way, the extra time will also mean I’ll be able to focus more of my energy on making Softoy Hobby the most comprehensive news site across both soft vinyl and keshi- yay! Before this though, I’m going to be taking some time out to visit the home of these very special toys that we all know and love, Japan’s capital Tokyo. Helping Rampage Toys’ Jon Malmstedt wrap things up before his move back to the States next month, as well as prepping for various shows we’ll be attending whilst I’m out there, I’ll also be spending some time on getting the proverbial ball rolling on my latest sofubi, the Sumoggub?ru. A follow up to the hugely popular Oozeball, Sumoggub?ru (roughly translated as Smog Ball) has been heavily inspired by smog monster kaiju – Bemon’s classic Kougai in particular – featuring a unique 360° rotatable mouth, 6 eyes which convey a wealth of expressions, as well as innumerable hidden details including power stations, waste pipes and even a micro Ooze-It for good measure! Designed by myself and sculpted by my good friend Richard Page of UME Toys, the crazy looking figure is due to be waxed during my stay, with a hopeful debut planned for DCon ’16 in late November… – Tru-Tek 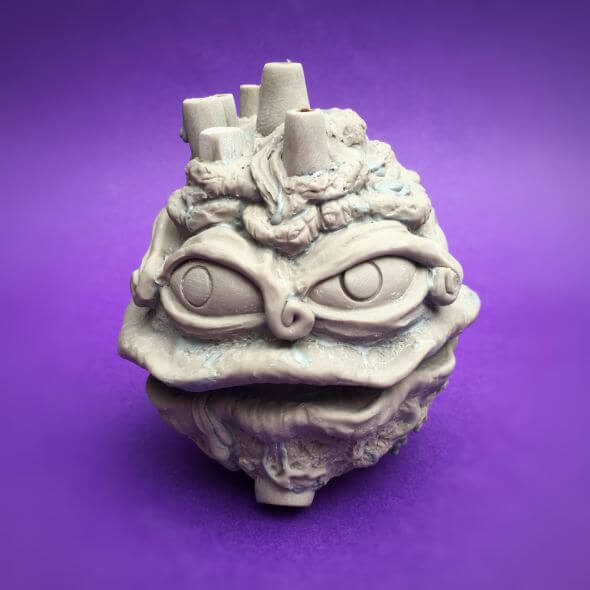 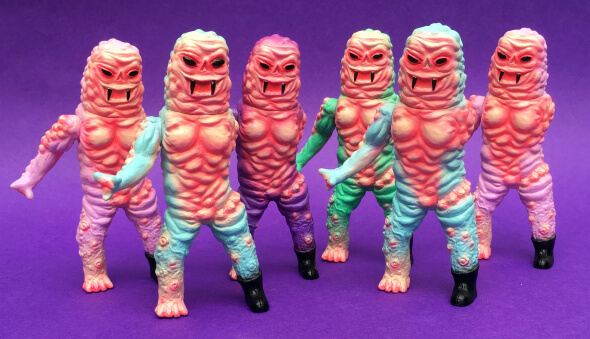 (all info and photos lifted from softoyhobby.com )