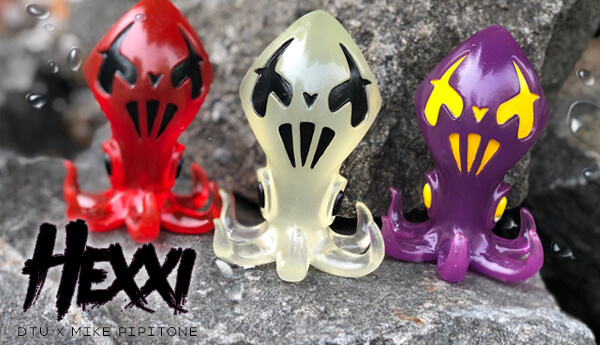 Welcome to Designer Toy ‘Universe’ as Sal Binetti of Designer Toy Universe FB group presents to you is Hexxi! Taking the FB logo and making it into a resin figure with the help of Mike Pipitone. Lucky collectors who are heading to Five Points Festival this weekend will have the chance to own Hexxi. WARNING MAY CONTAIN GLOW IN THE DARK GOODNESS! Heres what Sal had to say about Hexxi.

Firstborn as a concept by the mad minds behind the Designer Toy Universe group on Facebook, Hexxi was put into the hands of designer Mike Pipitone.  Mike, who is known for his original spin on the ‘Rook’ chess piece, has not only designed Hexxi, but has sculpted and cast each piece, to make the dreams of the DTU mascot becoming a designer toy, reality!

Making its grand debut at Five Points Festival 2019, Hexxi will be making its first home at Tenacious Toys booth #426!

Standing at 5” from tentacle “head-to-toe”, there will be 12 glossy colorways available, and 5-6 special pieces will also find their way to Five Points Festival!  Ranging from rich bright transparent colors, sparkles and even some glow, this full resin bad boy has loads of heft behind his menacing eyes.

Already causing a “splash” from anticipation, these babies are priced at a generous $85, and are likely to fly off the shelves!  Get on over to Tenacious Toys (Booth #426) before this initial run sells out! These color test colorways are EXCLUSIVE to Five Points Festival, and will not likely be recreated in future.

Keep your eyes and ears open, whispers are going around of a few little surprises in store for the near future for Hexxi!  For future updates feel free to apply to DTU’s facebook group at https://tinyurl.com/DTUgroup .