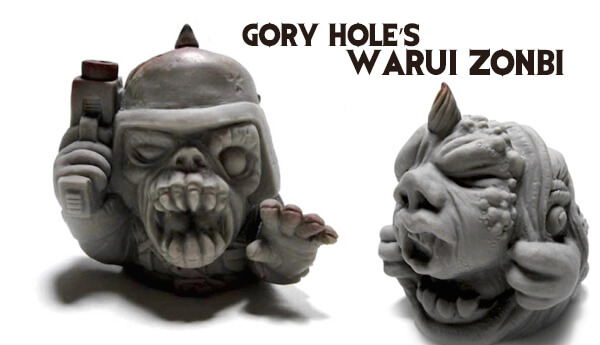 Our buddy Tru:Tek sent us in some sofubi goodness he’s releasing at Skinner’s booth at Designer Con 2015.
“It was a little close to the wire, but we can now confirm that the debut sofubi from Tru:Tek‘s Gory Hole imprint, “Warui Zonbi”, will be making it’s first appearance at Designer Con ’15 next weekend! Inspired by MaBa’s 80’s toy line “Zombies” (?????), as well as cult horror flicks from the 80’s and 90’s, the first round of finger puppet-style figures feature 2 designs; “SS Wolfgang”, taken from the classic nazi dream sequence in American Werewolf in London, and “Selwyn”, the zombie baby seen in Peter Jackson’s early b-movie classic Dead Alive.” 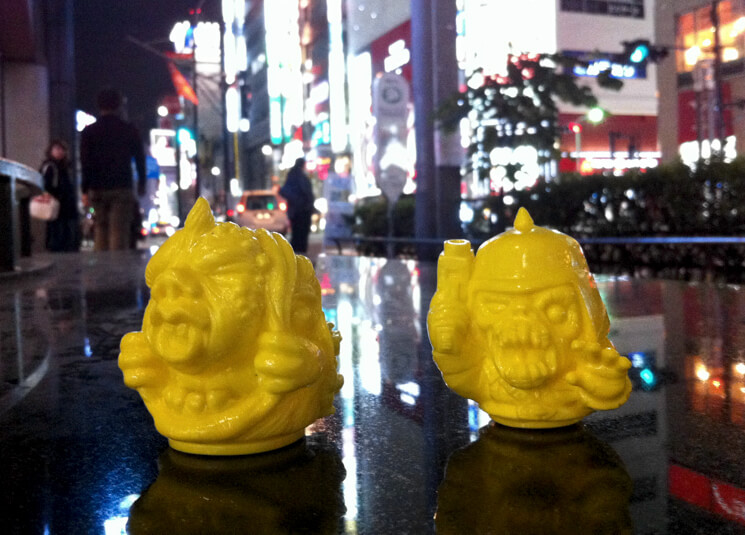 “Designed by Tru:Tek with control art from fellow horror toy aficionado John Santagada of Radioactive Uppercut, the pair were both sculpted by the legendary Makino-san of TTToy, coming in scale with the original Zombies at 3? tall, and featuring a similar split torso, capped bottom design. Debuting in super-limited quantities in an unpainted yellow vinyl via Tru:Tek at Skinner’s DCon booth from Saturday, November 21st, pricing for the set is still to be confirmed… Look out for an interview with Tru:Tek on the series in the DCon ’15 issue of Clutter Magazine.”

Check out previous posts here and here for some more in-depth info on both wolfy and the infant from hell from MAN-E-Toys.
Designer Con 2015 November 21-22, 2015 at the Pasadena Convention Centre. http://www.designercon.com/