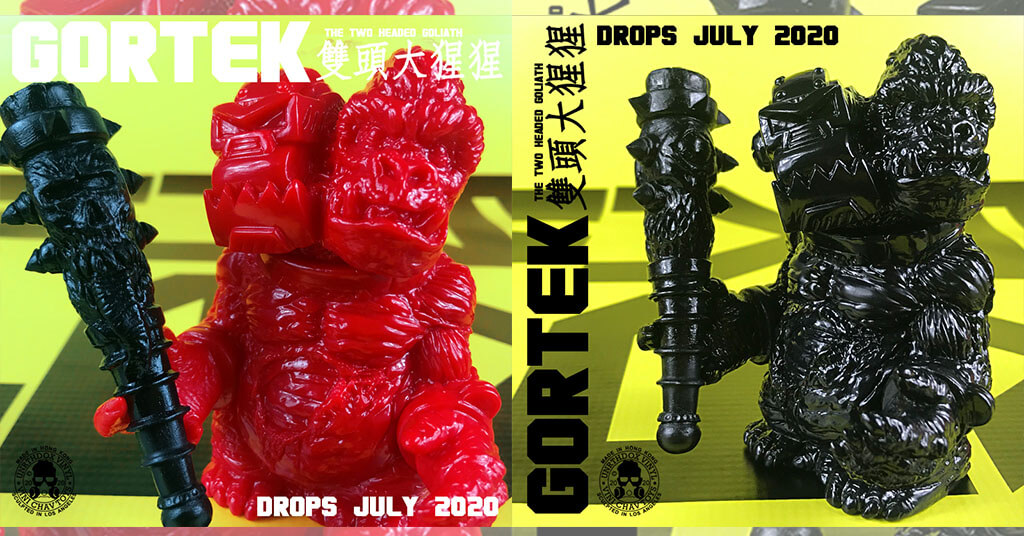 Monster maker Vini Chav is unstoppable! From resin to keshi creations, original sculpt works even for other artists concepts, he does it all.  Always working hard and stepping up his game with conceptual releases. Creating new characters and perfecting his casting skills. So what’s missing you might ask? Maybe a sofubi release? Well, not anymore, Gortek The Two Headed Goliath is finally upon us!

Vini Chav is playing the sofubi game, and these are good and exciting news for everyone.

Where did he come from? Why is he here? Nobody really knows though World armies have tried to stop it. But our human primitive projectile weapons are no match for GORTEKS Laser Vision , Powerful Claw and Sidekick Battle Club. Bombs have been cast upon his flesh only to reveal a cybernetic chassis under his thick skin, making his interiors virtually indestructible.

His motives are unknown but he has taken LOS ANGELES as his throne. TV stations have been taken over by a powerful signal emitting from GORTEK calling to “BRING FORTH THE SYMBIOTE !”. Years ago there had been rumors of a young boy named AERO who merged with extraterrestrial pathogens which gave him supernatural abilities. Could he be the key to stopping GORTEK!

GORTEK Stands at 4.25 inches and is ready to conquer and destroy with 3 points of articulated kaiju action!

Available in RED and BLACK VINYL BLANKS packaged in a frosted bag with header card and authenticity art card.

Price is yet to be determined. Drops is scheduled for July 2020. Stay tuned for more updates.