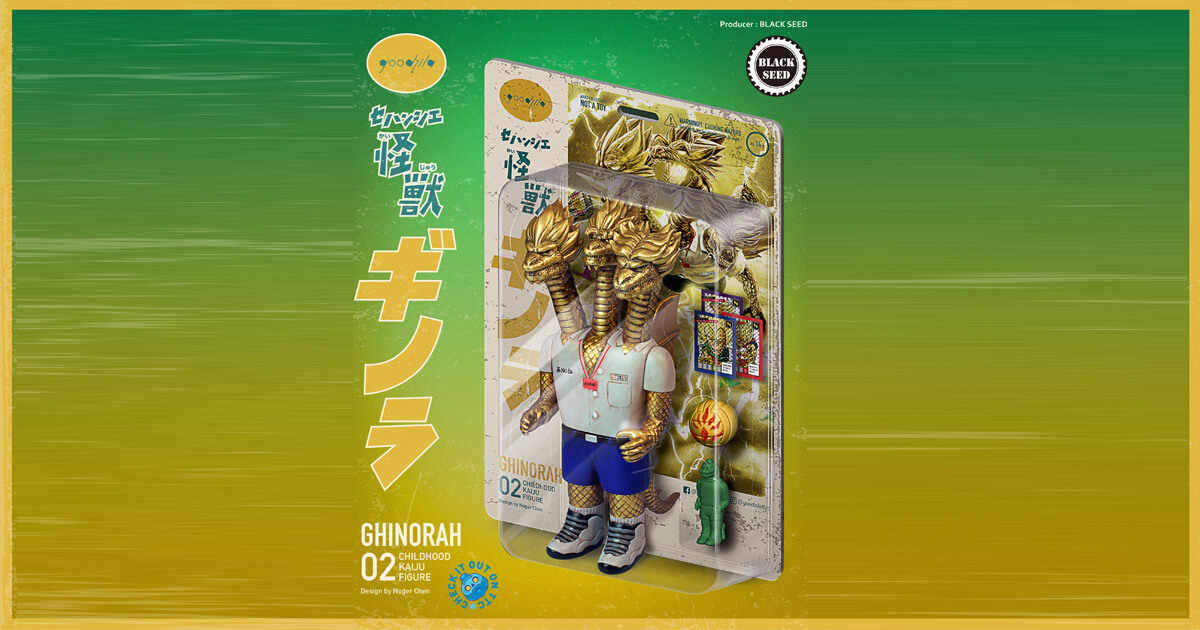 Just over seven months ago Goodzila x Black Seed sent more shockwaves as images of GHINORAH Goodzila CHILDHOOD KAIJU FIGURE 02 by Noger Chen Nog Toy x Black Seed Toys right HERE! although last year it was only an illustration it made you and us hyperventilate (ok,maybe just us,HA) our bank accounts are well and truly fucked….. Well, today he’s looking to break the internet once more with GHINORAH release details and seeing the vinyl turn around for GHINORAH

Like we said before, kaiju fans are you ready for “what you didn’t know you needed” originally designed by Noger Chen the illustration went viral earlier in the year after the illustration was part of a show. Noger’s idea behind the concept was What would represent him as a child growing up on the 80’s. Linking up with designer and soft vinyl veteran, Black Seed Toys to make Nog Toy Noger Chen’s “Goodzila 好吉拉” come to life! Who would have thought mixing Godzilla with a blast of 80’s nostalgia would work so well! Now with the King Ghidorah in the works we best start saving! meet GHINORAH CHILDHOOD KAIJU FIGURE 02 coming with childhood accessories!

In my kid period, I’m a kind of role model student. Teachers’ comments were always, a very nice student, and a good student. However, I was jealous of those students who are famous and would take some “non-school stuff” to show off. And, they were also good at playing dodgeball, which I dreamt to be. Ghinorah is my imagination from my childhood who wanted to be a bit naughty, strong, and the king of dodgeball in primary.

Preorder starts on 28 June, the retail list will be published Black Seed on 28 June .In TW,  1982 kids will be the exclusive retailer, and they have a solo show for Noger Chen, called ” Goodzila Assemble” in TW dated 28 June to 17 Sep. And, there’re many one-off customs for display and selling.