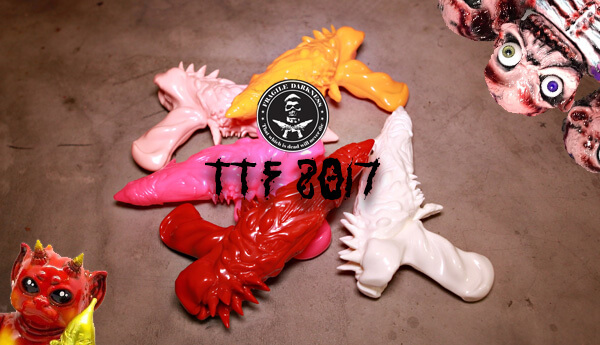 They class themselves as newcomers, that may be true but already making a huge noise and a name for themselves is FragileDarkness! Most known to us with their crazy ass Cursed Ray Gun. With only days till Taipei Toy Festival opens the doors FragileDarkness sent in what they have installed for TTF 2017. Be warned, if you’re squeamish look away now.

A relative newcomer to the soft vinyl/sofubi toymaking scene, FragileDarkness has been making monster toys and collaborating with international artists to paint them. The aesthetics of the toys veer towards horror and the macabre, but always deeply rooted in pop culture.

The most popular offering recently is the “Cursed Ray Gun” which has been selling out with every limited run. Artists such as Micheal Devera (US), Remjie (Norway), LordMasterPrince (HK), Octoplus Gallery (HK), Bug (China) and LionChen (China) are amongst those who have put their own take on the guns by painting them to a colour scheme and style they are most famous for. The toy guns have also been displayed at various festivals such as SuperFestival (Japan), Thailand Toy Expo (Thailand), ToyConUK (UK) and Xenoplasm 2 (Australia).

Fragiledarkness will bring his arsenal of killer kaiju rayguns for the first time to a toy festival. This is your one and only chance to own a piece of the infamous kaiju rayguns. Featuring 5 different blank colours – bone white, fire orange, hot pink, blood red and flesh beige. These are the last production run of the rayguns and they will not be manufactured anymore after this show. The first 5 who buys a set of 5 colours will receive a FragileDarkness mini T free! FragileDarkness will be at Taipei Toy Festival Booth B-21, 7th to 10th October.

Aftersales will be made available after TTF at fragiledarkness.bigcartel.com.