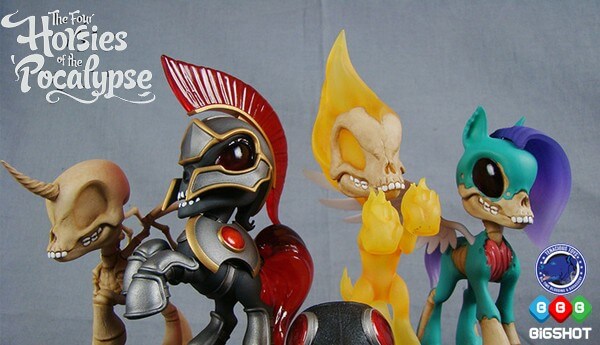 A new Kickstarter campaign has stared from our friends Tenacious Toys and BigShotToyWorks. Launching Four Horsies of the ‘Pocalypse collectible art toy figures Kickstarter with a target of $60,000 goal target. Led by Maddie (an older sister type with an affinity for destruction, funded in their last Kickstarter), these would-be Champions of Chaos are desperate to show their parents they’ve got what it takes to inherit the legacy.

The Four Horsies of the ‘Pocalypse is a campaign seeking to fund the production of a series of collectible figures based on a brand new universe of characters and concepts from Bigshot Toyworks!

It’s the end of the world as we know it…or is it?

Meet Calamity (Pestilence), Raven (Famine), Clash (War) and Ghost (Death). They’re the Four Horsies of the ‘Pocalypse (or at least they would be if they could only get their act together)!  This next-generation of doombringers are on a mission to destroy the Earth, but to do so, they’ll have to beat the likes of Queen Chroma and her rainbow sprite army!  Too bad they can’t crack teamwork to save their lives.

WHAT ARE THE REWARDS?

Rewards and packages, including the Four Horsies figures themselves in 3 different colorways, plus Four Horsies apparel, stickers, accessories and much more! check out the official Kickstarter direct link —>HERE<—

With the success of the previous Kickstarter for Maddie I am sure this will get the backing it deserves, goodluck guys. Thu, Feb 19 2015 1:30 AM GMT is the end date  more info and to see the rewards check http://kck.st/1AK6xRg