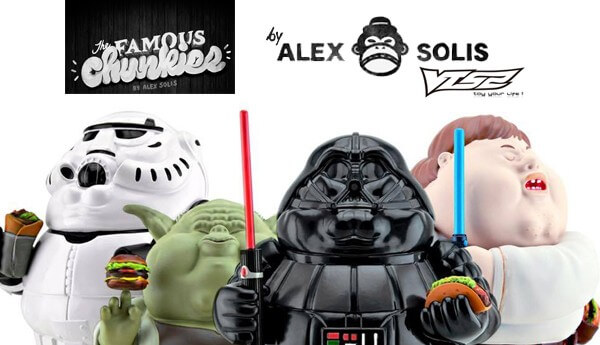 Artist Alex Solis “Famous Chunkies” gets his famous illustrations turned into art/toy goodness by the folks over at VTSS! The art/toy looks like its a good interpretation of the famous illustrations. Seeing in hand previous VTSS products they should be good quality too. It is nice to see Alex’s work getting so much attention and various companies bring his art work to life. There will be four characters as first batch release. They are Dark Lord, Trooper, The Grand Master and The Jedi. These four characters will debut at Young Art Taipei(YAT) Room 836 VTSS Art Space on April 24.

All of them are hand-painted on poly stone, come with burrito, taco, pizza, burger, gun and lightsaber as accessories.

Every figure has a COA card which is signed and numbered by artist.

Limited to 120 pcs per character.
Will take pre-order at VTSS website on April 11. Start to ship around end of May.

We also have a combo set of four characters! Limited to 20 sets only and 10% DISCOUNT!!

Get yours now at http://www.vtsstoys.com/ The Story of the “Chunkies” art series:

“While watching a Ninja Turtles movie with my daughter, we noticed that despite their strict pizza diet, the turtles could tirelessly fight crime and battle villains.

This is pretty common with characters in other cartoons and comic books — they somehow have amazing superpowers despite eating super bad-for-you junk food. I thought this could be sending mixed messages to kids.

I created this series to raise awareness about unhealthy eating habits. I wanted to show what these characters would actually look like if they ate so much junk food.”