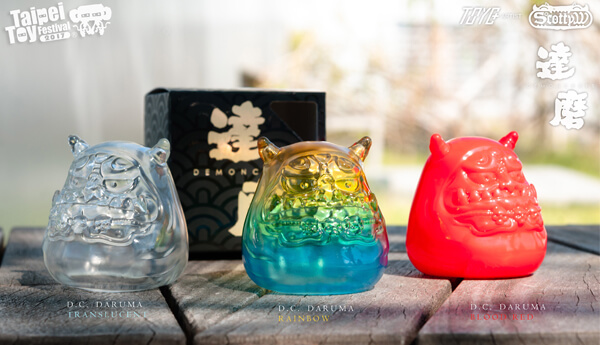 Japanese craftsman formed “Demon Craft” in order to save his daughter caught by monsters; On the way while he is looking for his daughter, He met “Tengu” which given him a “Daruma Amulet”, both the power of demon and daruma combined together, and finally formed a tiny and anger – “Demon Craft DARUMA”! Demon Craft has become one of the collectors’ favourite, today TOY0+ would like to announce a new collaboration project with Scotty.W.Toy, and bring collectors a new series – Demon Craft Daruma, which will be available at Taipei Toy Festival 2017(TTF). There is few exclusive colour will be announced and available for sale at TTF2017, as a big fan of Demon Craft, Daruma edition will be the collectables that you couldn’t miss in 2017!

Look out for this EXCLUSIVE Humanoid Demon Craft! Need a review? Check out our FACEBOOK LIVE Stream below.

Check out more prototypes from ToyZero Plus on out Facebook LIVE stream below.