We have lift-off! How does Steven Harrington, Steven Harrington x BILLIONAIRE BOYS CLUB ICECREAM powered by ToyQube collaboration sound to you? In the early hours, the fine folks at Hypbeast released the news of Cosmic Cone!

Steven Harrington now teams up with @bbcicecream label for a special edition sculpture entitled ‘Cosmic Cone.’ Standing 13-inches high, the collaborative figure portrays Harrington’s ubiquitous ‘Mello’ dog character clad in a space suit with BBC logos, and holding an ice cream cone portraying the brand’s mascot in one hand. The sculpture features movable appendages on its arms, head, and feet. Altogether, the figure will launch on June 1 as a blind box assortment (three different ‘flavours’) with only 400 figures made. – HYPEBEAST

Cited as the leader of a contemporary Californian psychedelic-pop aesthetic, Los Angeles–based artist and designer Steven Harrington is best known for his bright, iconic style that encourages a two-way conversation between the artist and viewer. There’s a timeless quality to his playful yet contemplative work, which is inspired by California’s mystique, vastly diverse landscape, and thriving mix of cultures. Embracing a multimedia approach, Harrington’s portfolio includes large-scale installations made of plaster and stone, handscreened prints, limited-edition books, skateboards, and sculptures. Alongside his commercial work, Harrington has exhibited artwork in Los Angeles, New York, Paris, Berlin, Milan, Barcelona, Tokyo, San Francisco, Chicago, Philadelphia, Montreal, Melbourne, and Dallas

(all media and info lifted from http://stevenharrington.com/ and HYPEBEAST) 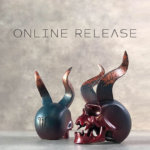 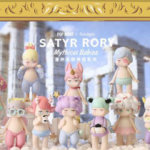