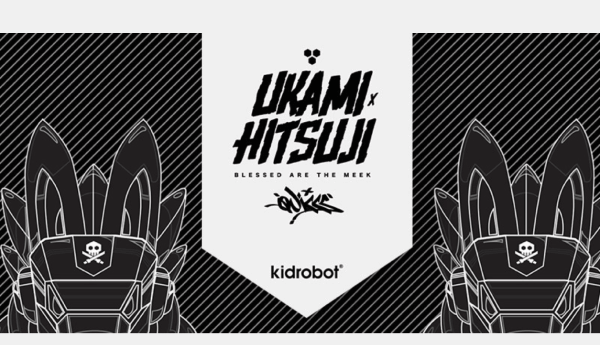 Oh boy, oh boy, oh boy! Quiccs fans rejoice! Yes, the rumours are true! Due for a 2019 release, Kidrobot have confirmed to The Toy Chronicle that a new collaboration between Quiccs x Kidrobot is coming!! The excitement is real! Oh, it’s real!

Prepare yourself to shed a tear as you read the backstory to Ukami x Hitsuji!!

Two lovers. Divided by war. Reunited by fate. A story from a time of intelligent machines raging war against their creators, mankind. Displaced to fight, Ukami, the wolf general stands with his pack of rebels fighting for survival. His lover, Hitsuji who he thought he has lost to the ruin of the world, hides away in a sheeplike machine waiting to find her lover in the remaining rebels during retreat. The day comes that a pack of wounded rebel fighters arrive into her village, seeking refuge from an attack. Ukami, the Wolf General, is one of the survivors, and Hitsuji immediately recognizes him as she helps remove his helm. She lets Ukami know that it is her inside the machine he is looking at. Ukami, saddened by her fate but overwhelmed with joy with their reunion, embraces her. Our lovers are reunited.

And a quote from Quiccs himself on this release…

Kidrobot’s main objective for me on this design was to make something I haven’t made, something different but can be from the same universe with TEQ63, Sharko & Ghost!

At this stage, we don’t know much about this release. Except that it will about 8inches tall. We’ll bring you more details once they are known. Keep track on this release by following the TTC Mobile App on both the App Store and Google Play. Totally FREE. Totally ACES. Designer Toy News the EASY way! Search: The Toy Chronicle on your favourite smartphone App Store now!