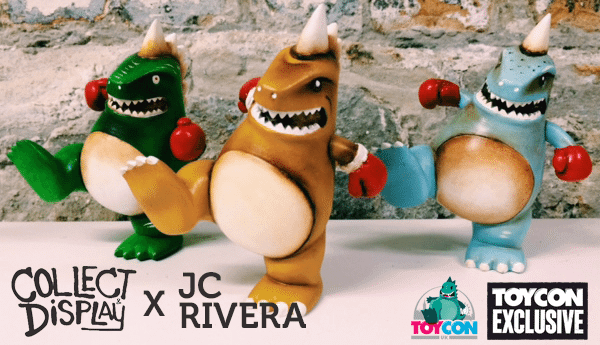 Collect & Display sure looks like the booth to be paying a visit at ToyConUK on April 12th! They have a whole bunch of awesome exclusives. Ones which we are going to share below. Hold on to your socks, folks!

First up, if you’ve not heard, Collect & Display will be joined on their booth by Chicago based artist – JC Rivera! JC Rivera was the artist who designed Collect & Display’s little furry mascot – Hugo! Whilst JC is in town he’ll be live painting a Mega Munny, as well as signing and much more on the Collect & Display booth! Oh, but it doesn’t stop there! Oh, no! JC will also have a number of ToyCon UK Exclusives available for purchase.

JC Rivera x Pobber – Bearchamp (Undefeated Edition)
JC Rivera’s first production toy is based on his signature character, The Bear Champ, which has appeared in numerous paintings and customs of his over the years.

Now for the first time, Bear Champ is now available as a limited edition production resin figure standing at 9 inches tall and comes with 4 points of articulation. The Undefeated edition features Bear Champ in his gold gloves and gold crown and is limited to just 50 pieces worldwide. They will be priced at £65.00 each. They will also have a limited number of OG and Monochrome Bearchamps available at the con. JC Rivera – Hugo vs Bearchamp Art Print
Printed by GalerieF in Chicago. JC Rivera designed this fine art print showing HUGO (our beloved Collect and Display Mascot) taking on the Bearchamp (Perfect for ToyCon). Measures 16” x 20″ and limited to 25 copies which will all be signed and number by JC Rivera.  Please note the ToyCon Exclusive text will not be included on the print. Price: TBC

Collect & Display do have one further JC Rivera exclusive, that is going to blow you sideways, but you will have to keep checking The Toy Chronicle over the weekend for further details!
All the above are ToyCon exclusives, however Collect & Display will have stock available via their website (www.collectanddisplay.com) after the ToyCon. These will be made available Monday 14th at 8pm GMT.