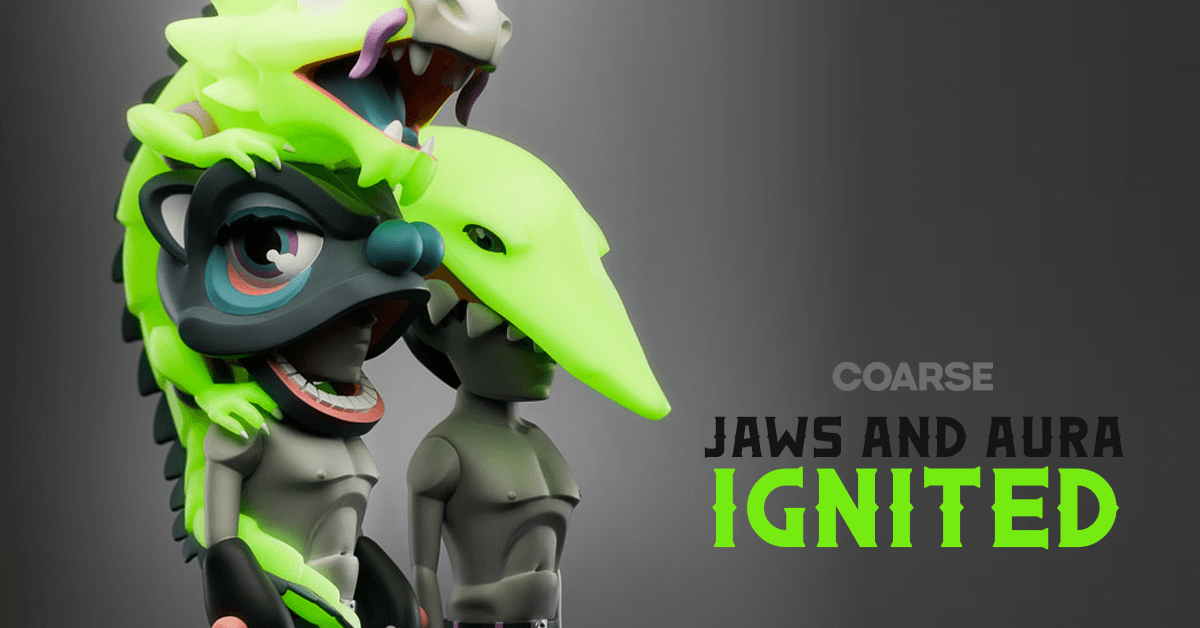 The final colourway of Jaws and Aura was announced earlier by coarse toys today. Over the course of the past 11 months, we have been treated to three colourways of the Jaws and Aura set, following the Half Moon version and the Halcyon version earlier this year. Will you be grabbing the Ignited duo?

How Bright does your Aura Burn?

For the first time ever, Jaws is lighting up the dark. With his companion piece Aura, the noops have nothing to be afraid of anymore. As the sun sets on their home planet of The Elastomer, the best parts of themselves radiate an intrepid glow, blinding their doubts and fears, pushing them fearlessly into the night. Other creatures cower in the darkness, but as night pushes on, the noops feel more intrepid and wise. The pitfalls of their own existence no longer frighten them, and they believe they will evade the harvest when it comes. For once, they see their own image in the stars. Life is short, yes, but it is theirs to live. If only we had known this sooner, they think, but worries like these can’t haunt them anymore.

Jaws and Aura – Ignited celebrates the parts of ourselves we can no longer hide behind and the answers that have been with us all along.

The time you lose is lost forever. Let the night air swallow your fears, and open yourself up to you who you really are.

On sale Thursday, October 10 at the below times at https://www.coarse.shop

Priced at $360 (about £295) for the set. Comes with both Jaws & Aura, standing at a little over 10inches tall and a little under 14inches tall respectively. These have proved incredibly popular (unsurprisingly) and we expect the same for the Ignited version too. F&F release will likely be starting tomorrow (9th October). You’ll be able to buy HERE when it does drop.

This set is already to ship!