A lot of the hype surrounding the past weekend’s Five Points Fest, amongst a throng of other great releases too, was the number of releases from one of our favourite Philippine artists, Quiccs. From large queues forming in the courtyard, to sell outs at multiple booths and lets not forget about those awesome KCBC can designs from Quiccs that sold out (read HERE). It’s no surprise to us to hear that within less than a week of Five Points Fest ending that we are starting to hear of future Quiccs related releases.

This past evening we have learnt that artist Red Guardian (aka Angel Martinez) will have his own release of TEQ63 in the near future. Inspired by Angel’s Clown style, this new Clown TEQ63 will have a glossy coat to make it look like porcelain. This new 6inch tall vinyl Quiccs TEQ63 figure from Martian Toys forms the basis of the new TEQ63 Artist Series that you’ll all be seeing over the coming weeks/months. The sold out Brightstar TEQ63 by The 3D Hero was part of this Artist Series too. Who else do you think we’ll see in this Artist Series? We are sure plans are afoot to include many of your favourite Designer Toy artists. Check out some more images of the new Clown TEEQ63 below, and when you’re done you’ll find some further information on where to purchase this release…

So much went into the inspiration and obviously my Clown 🤡 plays the biggest role but you have to understand the “Clown” and what he represents…inspiring, having fun and creating! You don’t have to be a painter to be creative; cook something amazing, plant some flowers, make a paper airplane, do something FUN for a little while before you go back to adulting.

📷 ALL ABOVE PHOTOS PROFESSIONALLY SHOT BY @rat.daddy_ 📸 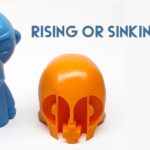