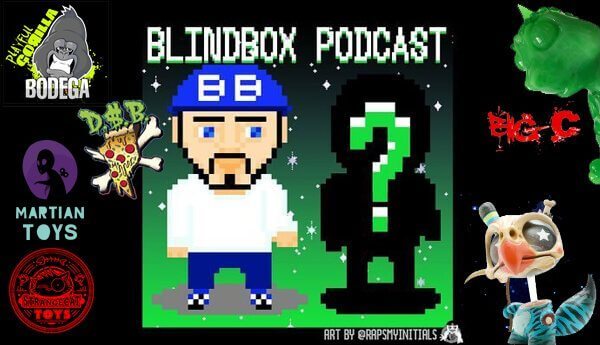 It’s been a long time since we caught up with The Blindbox Podcast. April been a busy ass month, don’t hate. Anyway getting back to The Blindbox Podcast we were sad to hear Catfish has taken time out from TBP and GM has taken the big task of going alone. We miss you Catfish! Now GM has a new format which works very well and a good variety of random co-hosts  ( true to Blindbox style) Expect big jokes and BTS info, tips and tricks in all the episodes. PlayfulGorilla Alex will forever be imbedded in our minds and ears forever. Great to hear from StrangeCatToys and Martian Toys their views from retail perspective. Topics like how to manage PR and getting yourself more exposure.

Here’s the episodes we’ve caught up with.

“The Blind Box is back with your ToyCon Review. RXSeven recent got a chance to be shipped over to the UK to join the people (courtesy of this episodes Co-Host Aaron from Martian Toys) & joined The Blind Box to talk about his recent travels. RX also takes time to talk about what got him into customizing in the first place, collecting, and where his unique style comes from. We also get random and hit some movie talk (GM recently saw a couple of movies he felt needed to be discussed) and of course, Cory from StrangeCatToys joins us for “StrangeCatCorner” where he tells you a little bit about recent and upcoming releases while making moves out of the van down by the…beach?  This is The Blind Box, it’s a little different, but that’s why you’re here. Leave feedback and let us know what you think going forward, this is for you, yours and theirs!”

The Blind Box is back after some technical difficulties just before this weekends Clutter Gallery show featuring The Hit Squad. Big C joins The Blind Box to talk about the upcoming show, his latest creation (Baby Fatts) & it’s upcoming releases that are in conjunction with outlets across the country. PlayfulGorilla Alex makes an appearance as we step into the future and link up his TwitchTV activities with The Blind Box podcast (Spoiler: This could be happening more often in the future…) GM also mentions a new concept regarding Toy Segments here on The Blind Box:  If you listen to a segment as an artist, break out your tools and cook something up for the people. Take pictures and post to IG, tag @BlindBoxPodcast and we’ll share your creations with the people. We will be releasing another episode very soon and we are picking up into the regular schedule real soon with a load of great guests, stay locked in and tell a friend to tell a friend. It’s the Box!

“Episode 36 is where things…change. GM & Catf1sh started this podcast 136 episodes ago. 2 segments each, that’s over 250. What I’m saying is we started from an Xbox Live party & ended up talking to some of the biggest, best, & most influential names behind the scenes and at the forefront of Art, Music, Modeling, & more. This isn’t going to stop any time soon, but it is going to…change. Catf1sh talks about his reasons for stepping off the mic here at The Blind Box, GM lets people know what to expect in the future & we keep things moving here with Guest Co-Host RenOneLab & new guests to the show PlayfulGorilla & JFury of the HitSquad. They take time to talk about an upcoming show at Clutter Gallery and a whole lot more of …a whole lot more? It’s still The Blind Box, the conversation will always be random, except now there’s a new twist.  What’s the twist? Find out by pressing play.  Also, check out a sit down interview that GM did with the guys over at IndustryPrintShop in ATX at SXSW for SQUADTS(!!!) with a special Behind The Scenes as they gear up for the 20? Assembly Show over at Rotofugi in Chicago.  Tell a friend to tell a friend, I’m not sure this is still the beginning but the good news is we are still for the people, this is The Blind Box.”

“Episode 33 is here, SXSW is beginning and GM is hitting the road. But before that happens, get to know John Pryor aka DollarSliceBootlegs. DSB joins The Blind Box to talk about his experiences in the resin game, opening vs not opening his toys, being born in the 80’s, his Morrissey/Supreme “collab”, not getting a C&D, & his how the world tends to view his work. GM talks about hitting up Clutter Gallery & Ron English, ideas being lifted & more.

In the 2nd Segment of The Blind Box we get to know Tyler Ham aka Not Gary Ham’s Brother. Tyler joins the show to talk about …..way more than toys.  Mainly because Tyler will be back as a part of the Marsham Toy Show so we don’t want to get alllllll the toy info now, right? Right. Get to know Tyler Ham and we even get a surprise visit from the Ham of all Hams aka SHAM aka Gary Ham.  This is The Blind Box. If you see it out in these Austin Streets make sure you stop and say whattup.”

“Young Sober Life still in effect for young Catf1sh. GM decides to start off the show talking about people who eat soap (?) and glue sticks (?!) and then the beautiful Priscilla Katerena stops by to talk modeling and being a CG Model, coconut oil magic, the upcoming Subscription Service for The Blind Box, Cam Newton and this past Superbowl, Beyonce’s half time performance, Tinder, The Blind Box Toy Episodes & why she listens to us, & then we also hit the good ol’ Why GM Doesn’t Want to See You Having Fun. Because, why not?

Segment 2 of The Blind Box we get a visit from @Paperhamlincoln where we chop it up about Kanye being awkward at his fashion show and why the people looked so …sad…to be there. GM accurately predicts that the final version we heard at MSG wasn’t really the final version, Tight pants, Managing Yung Rio, SXSW vs A3C, Segways vs Hoverboards, Flip Flops, Petty Cabs, Michael Christmas’ gas station jacket, & a whole lot more….really.  This is Episode 21. Drink up.”

What GM have in store for this season? Tune in on iTunes to open The Blind Box to find out HERE. All podcasts are downloadable at http://blindboxpodcast.com/