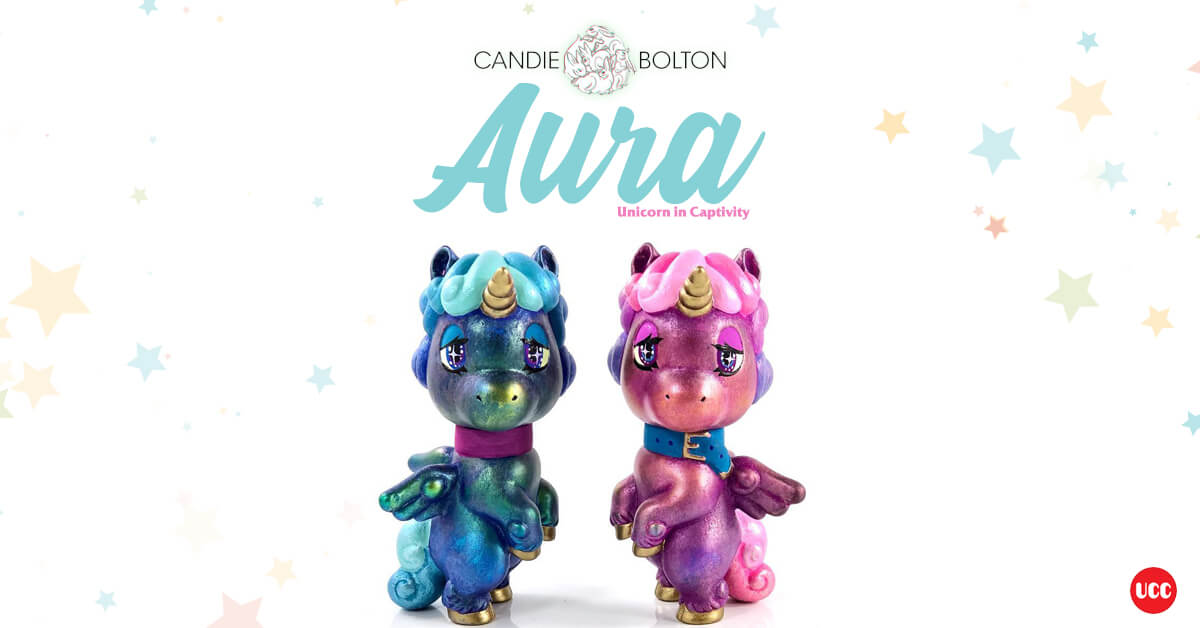 You have seen the painting, seen the process and heard the backstory behind Candie Bolton’s Aura. Powered by Unusual Creation Club Candie presents to you Aura soft vinyl figure!

My newest toy, Aura, is ready for her debut Aura: Unicorn in Captivity is sculpted by me and released by . This is the first that I sculpted myself. It was very challenging, but I learned a lot in the process. These are my first hand painted customs!

Pearlescent Aura will be available at the UCC booth A50 at STS (Shanghai Toy Show.

We spoke to Candie and she gave us an insight and a little background into Aura: Unicorn in Captivity. With all the unicorn stuff in the scene what makes Aura stand out is the backstory and the Candie wants people to know it’s not just another unicorn. shes not just jumping on that bandwagon. For now, Aura is a painting but the prototype has already arrived at Unusual Creation Club for production so this will be your first time to check out Aura before she makes the transtion into a soft vinyl art collectable.

I was inspired by many things from my childhood for this design. Primarily My Little Ponies, I used to collect them and my mom, Linda Mattson took over my collection and now has one of the most complete My Little Pony collections. I was also inspired by Takara Ponies which were basically the My Little Pony brand in Japan. I’ve always wanted to collect these, but they’re super rare! Also, the painting is a nod to the famous Unicorn tapestries – Candie Bolton

I definitely pulled a lot of influence from my childhood to make her. I know a lot of my art boarders more on the creepy side lately, but when I was little I was all about unicorns and rainbows.

Work in progress on Candie’s painting Aura: Unicorn in Captivity Original painting will be on display at Haven Gallery for the Folklore group show opening April 6th.

Aura is Candie’s new unicorn character being produced into a toy by Unusual Creation Club.

Before you leave check out candies mom’s collection!

Stay tuned over the next couple of weeks to see the prototype of the soft vinyl Aura: Unicorn in Captivity by Candie Bolton x Unusual Creation Club.

Stay tuned for all the releases and exclusives. For those who can’t make it, look out for our LIVE streams, HERE on our Facebook page.

YOU CAN GET YOUR DAILY DESIGNER TOY FIX FROM OUR TTC MOBILE APP. IT’S FREE TOO! FREE! DOWNLOAD ON THE IPHONE OR ANDROID SMARTPHONES. SEARCH FOR “THE TOY CHRONICLE” AND ALL YOUR DESIGNER TOY WISHES WILL COME TRUE! PRETTY MUCH.

DID WE FAIL TO MENTION IT’S FREE.