We all know by now that Jason Freeny is a mastermind behind his signature Anatomical style, but over the past couple of months TTC HQ has been glued to our screens patiently watching Jason work his magic on the classic MTV logo. This ain’t no platform, he made it from scratch and lord knows how many hours and how much sanding he’s spent on it. Fast forward to TODAY and it’s more or less complete! Jason Freeny shows his craftsmanship skills once more and really hit us with the nostalgic button as we grew up watching MTV back in the days.

Maybe not intended but we look how Jason’s added a little humour into the MTV logo. We think a lot of collectors will be wanting a production version for sure. 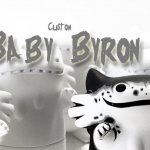