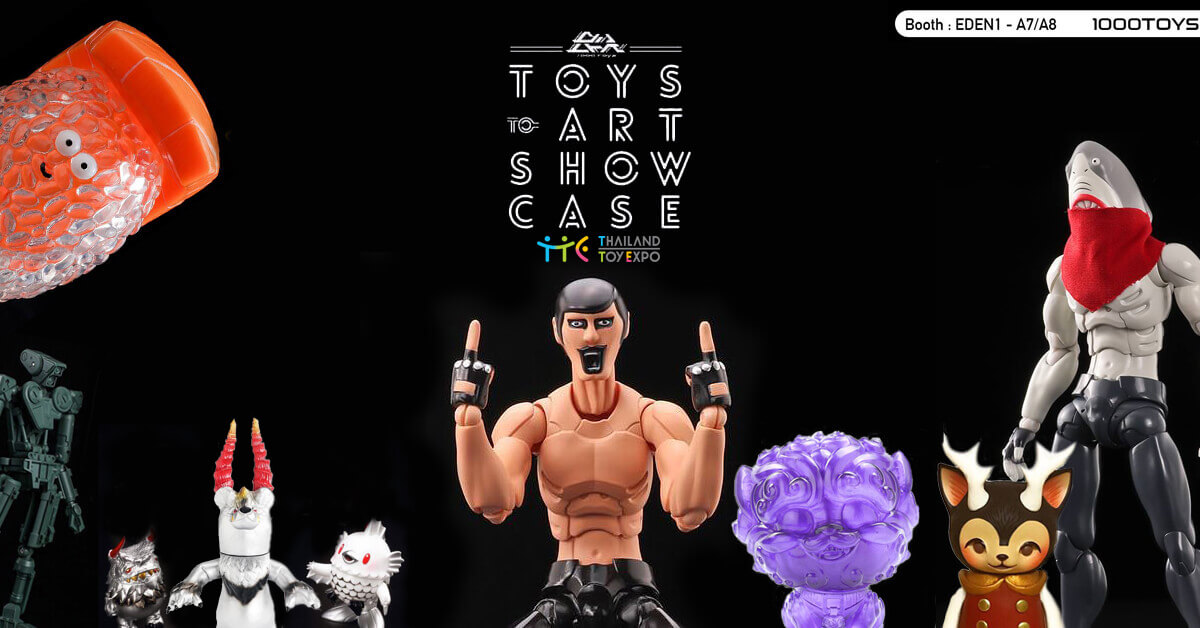 When 1000toys come, they COME with a BANG! Thailand Toy Expo 2019 are you ready for 1000toys / Toys To Art Showcase / Sushi L.A.  A wide range will be up for grabs. EXCLUSIVEs as well as special convention releases ranging from high-end action figures to sofubi! Below is what Don aka Datadub of 1000toys / Toys To Art Showcase had to say about the insane amount of releases and sneaky releases that will have your pulses and bank balance pulsating.

It’s that time of year once more! Time for the Thailand Toy Expo now enjoying its 7th year as one of the premiere indie toy events in Asia!


Toys To Art Showcase are headed to Bangkok from Japan and bringing a world of great toys with them! Stop by at Booth at EDEN1 – A7/A8 and check out all the goodies.

For the Robot lovers, they will have all 3 colourways of ROBOX – the transforming action figure from 1000toys and Korean illustrator Kim Jung-Gi! Plus a wide selection of MechatroWeGo, the adorable little robot designed by Kobayashi Kazushi (Moderhythm).

In addition to all the exciting release available at 1000toys booth there will be MORE exclusive versions of Sushi L.A. also available at the event. From JP toys – HAPPY SUSHI L.A. cast in crystal clear and glow-in-the-dark orange vinyl – a combination sure to put a smile on your face. And from Hong Kong, Milk Cargo will have the MILK exclusive versions of both SUSHI L.A. Maguro and Ebi.

TOYS TO ART MADE in JAPAN SOFUBI SELECTION
—————————————————–
TOYS TO ART will have a selection of MADE in JAPAN Sofubi including the Anniversary Morris by Kaori Hinata (Hinatique), Wild Hunt Iron Dark Stalker versions by Science Patrols, and a special TTE exclusive version of Hiza by Mesi Style!!!

TOYS TO ART – WEST TO EAST selection
———————————————-
Toy To Art is honored to offer the creations by some of the hottest designers from the West to toy lovers in Thailand!

From design powerhouse Horrible Adorables, Toys To Art is proud to offer an exciting selection of their one-of-a-kind standalone figures plus a sampling of their vinyl toys.

Sad Salesman was Breakthrough Artist of the Year at the 2018 Designer Toy Awards! We are so happy to have some of Dessert Oracle Figures available at the show!

We will also have 2 versions of the Croconana sofubi by popular US-brand Sorbet Jungle!!

And last but not least….
Great things have small beginnings!

1000toys is very excited to host the debut release of Shishi – the Tiny Guardian a new figure by Bigshot Toy Works – in 2 limited edition colourways – Sakura Pink and Clear Plum. Be the among the first collectors to get this exciting new sofubi vinyl figure.