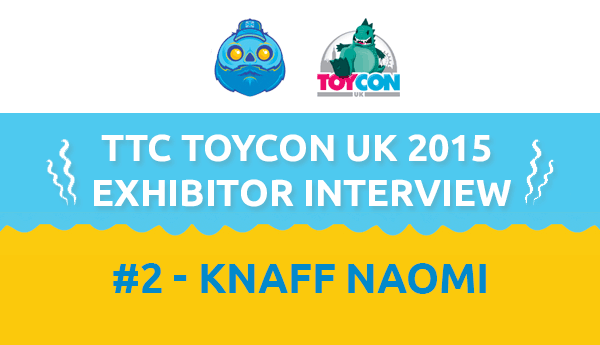 Following on from our first TTC ToyConUK 2015 Exhibitor Interview yesterday, we now meet Knaff Naomi who will be at TCUK for the first time this April.[frame align=”center”] [/frame]Tell us a little bit about yourself & your background?

Knaff Naomi: I grew up between France and the UK were I went to school in Film and Animation. I enjoyed making short films but my favourite part was always Character and Set Design. I naturally veered in that direction.[frame align=”center”] [/frame]How did you get in to the Designer Toy scene?

Knaff Naomi: I started collecting toys a few years back after moving to Canada. I didn’t know much about the scene until I found out about  Designercon and just couldn’t wait to participate.

Knaff Naomi: My round file.

Knaff Naomi: Haven’t done any of that yet but it’s on my mind.

Knaff Naomi: The main one would probably be Bob Conge, his Night Gamer has had a huge influence on me!

Knaff Naomi: Probably Designercon, I saw so many great things and met a lot of great people.

Knaff Naomi: I’m currently working on a balancing toy ICAR, which will hopefully be ready for Toycon! And plenty of resin smaller pieces are in the works…

It would have to be 2, Mountaintop by Bwana Spoons/Munktiki and Jesse Hernandez’s Ozomahtli. Find Knaff Naomi on: http://www.naomiknaff.com/. You can also hit them up on Facebook!

ToyConUK 2015 is going to be bigger than ever, and with tickets still available, you don’t want to miss out! If you’ve not bought your ticket yet, head HERE and get it before it is too late.