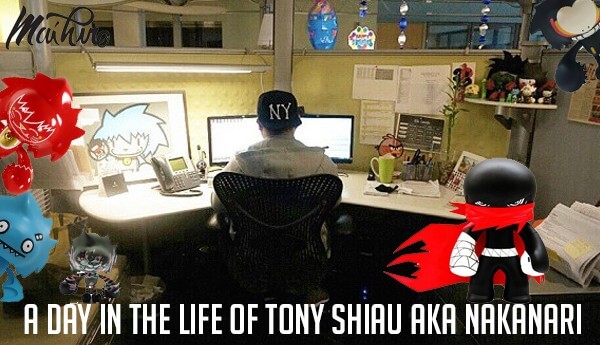 Our good friend Tony Shiau/Nakanari  Co-Owner/ Creative Director. Born in Taiwan and moved to USA at a young age the self-taught artist Of Maihiro shows us a glimpse into his typical day.

Taiwanese Self-taught artist with a style toy creation and graffiti. Tony Shiau Nakanari was born 1979 in South Taiwan and from childhood began collecting and designing toys. It grew from one of Nakanari’s favorite hobbies to a career he wanted to pursue when he grew up. Nakanari distinct designer toys are infused with oriental style and a colorful mixture of innocence and cute characters.

His typical day at 5am at his university job being an international representative. Food plays a big part in Tonys life, so lunch time is hang out time with his co-workers. He loves any thing from the local joint’s like Seito Sushi. Good variety of food throughout the day. Mai Hiro time fully kicks in, check emails do a little social media, follow up the commission project (does that look like Michael lau style spike?) For a tribute to his favourite artists he has been customising Spiki’s incorporating the style of that artist on to his own platform.

Do you recognise some of the artists? personally I cannot wait for all of them to be completed and showcased in the future.

Tony not collect art toys himself but he is one big Sneaker head! We asked him what fav sneaker that you own? Nike Free Orbit 2 design by Nathan Vanhook. We also asked “If you have to choose one toy from your collection which one would it be? ”

What is your holy grail? Michael Lau original 1/6 maxx 10PM is lights out for Tony, ready for that early start. “Design By Belief.” This is the Mai Hiro way…..

Right now Tony has a few releases like is Spiki Lucky Cat Lunar edition, which is available via http://www.kusovinyl.com/ Thank you Tony for taking time out to speak to us again and giving us a little window into your day.

Who would you like to see on the next TTC “A day in the life” from? requests below.