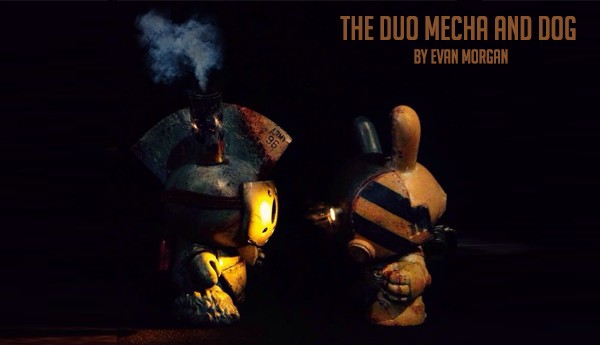 Our very own in house customiser Evan Morgan has been in demand ever since he customised that monstrous custom Kidrobot Munny into BIOSHOCK BIG DADDY. Well he is back, this time working on a couple of Huck Gee Dunny’s, first is Huck Gee Dog and the second of the duo is Huck Gee Mech. Evan has a dab hand in electronics, so the Mecha has a full LED circuit inside the head for the light, complete with a switch at the back. Smart ass! The dog features a gatling gun arm with a fuel tank on his back and a styrene exhaust on the ear. While the mecha features updated rocket boosters, small guns in the arm. Both of the Dunnys are painted by airbrush in a yellow and blue colour scheme and faded, weathered and dry brushed by hand. These also feature hand placed decals including “Army 96” on the dog and “Airforce 74” on the mecha. Whats your take on Evan’s customs? I think he is improving a lot, maybe less weathering next time? still pretty cool customs.