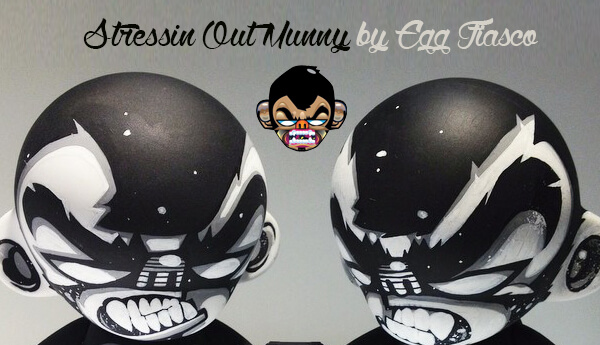 Artist Egg Fiasco, took a little time out to do a spot of vinyl toy customising and knock it outta the park with his black and white custom Kidrobot Munny. Egg Fiasco known for his murals isn’t new to this part of the designer toy scene, having worked on Quiccs Teq63 3.5″ Resin Toy late last year and a number of custom vinyl dating way back in 2010. Egg Fiasco’s trademark Ape got KR Munny treatment along with a custom Nixon watch too.

We’re used to seeing bright bold cosmic colours from Egg Fiasco, but seeing these customs shows how versatile he can be and willing to step out of his comfort zone. We hope we see more custom toys from Egg Fiasco in the near future.

Egg Fiasco (b.1986) studied fine arts
In a University in Manila but in 2006 he got enamored more in the risky frenzy of wall tagging and graffiti. His signature tag is punctuated by fluffy whipped forms and his ubiquitous namesake that are shaped like three sneaky eggs.

Few years after he started experimenting with several styles and techniques. His works are convergence of several influences, not only urban art but also from pop culture, folk arts, comic graphics, toys and tattoo culture. With his image, he try to create live worlds that mutate and transform all the time, Retro futuristic images and ambiguous characters. Known as neo-graffiti or post-graffiti. He participated in numerous group exhibitions and also a part of different communities that showcases ephemeral art on streets. He also works as a tattoo artist. (all info and photos lifted from Egg Fiasco social media)