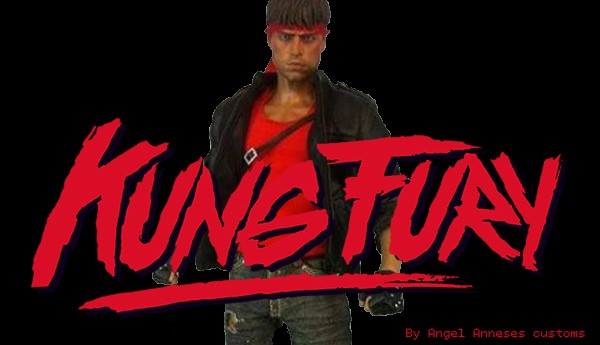 It was only in due time before custom would be made of the cult hit Kung Fury! Spanish kitbash customiser Angek Aneses has just put together Kung Fury 1/6 scale action figure and its dam impressive. TTC doesn’t really cover too much Kitbash stuff but this is too good not to show the world. Everything looks the part from all the accessories but most important the paint work with the tones just like feature film. Still don’t know what Kung Fury is? check the video below, some outrageously crazy funny shit.

“Kung Fury is a 2015 Swedish martial arts comedy short film written, directed by, and starring David Sandberg. It pays homage to 1980s martial arts and police action films. The film was crowdfunded through Kickstarter from December 2013 to January 2014 with pledges reaching US$630,019, exceeding the original target goal of $200,000 – wikipedia”

Will someone like ThreeA pick up the licence and produce an official Kung Fury figure? who know the future but if you want one drop Angel Aneses a message HERE. Angel Aneses has a great portfolio of kitbash work so you can have a flick though on the FB page HERE and email Angel at [email protected] for a custom.