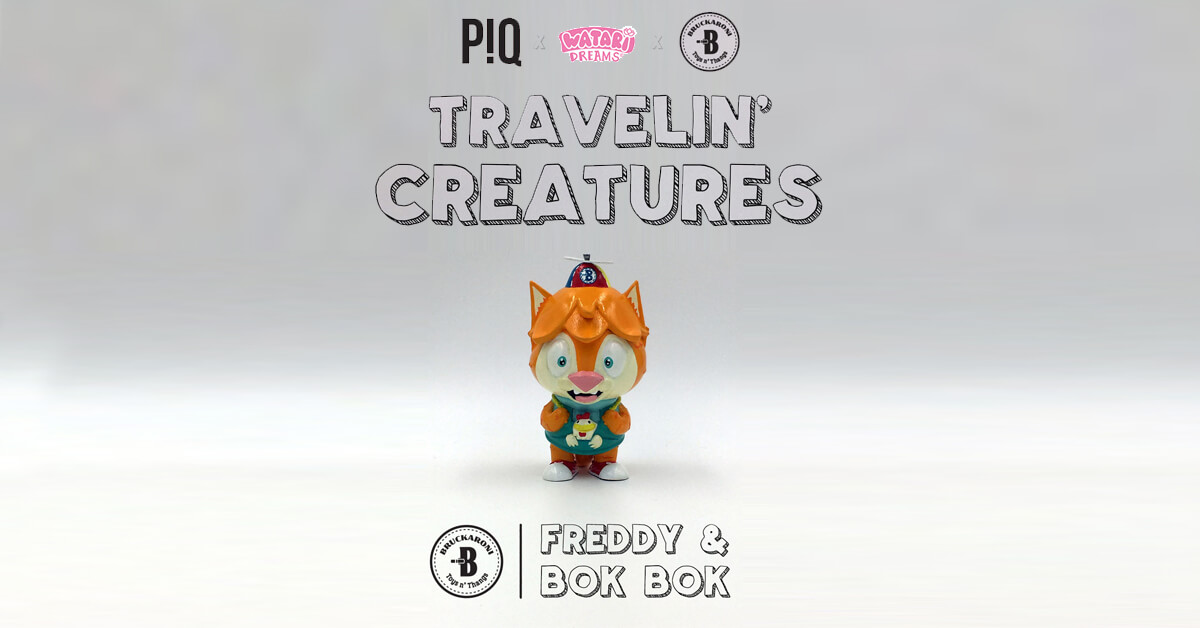 Bruckaroni takes on Watari Dreams “Kappa” character. Ready for Javier Jimenez Watari Dreams brand ” Travelin’ Creatures” show which opens this weekend at PIQ which will feature 25 artists from around the world. Meet Freddy and Bok Bok the custom “Watari Kappa” which features Bruckaroni’s bulging eyes and micro-cap. Loving Bruckaroni’s version for sure and takes us back to his past Magnificent Donkey custom.

Bruckaroni modified it into a cute little fox and chicken named
Freddy and Bok Bok. Freddy and Bok Bok are two unconventional pals taking life one adventure at a time. Their latest adventure has taken them to NYC for their big show at PIQ in New York City.

Created by Javier Jimenez under the Watari Dreams brand for the Travelin’
Creatures show opening this Friday at 7pm EST at PIQ’s Hudson Yards, NYC
location.


They will be hanging out on display in PIQ’s Hudson Yards location July 12th – July 31st. If in the area stop by and say hi to them. They stand about 4 inches tall and were customized with super sculpey and acrylic paint. If interested in adopting them they will be available for $185. It’s unclear if they will be available online at www.piqgifts.com or if you need to call the store at 646-484-6009 to make them your very own.

Watari Dreams brand has its own unique universe where many different characters with their own stories exist and interact with each other, all under the common central theme of travelling and exploring new places and cultures. In Watari Dreams, every character is a wanderer with its own reason for travelling.

Watari Kappa is a small kappa girl who got bored of living in a pond and decided to set sail and explore the world.

Check Bruckaroni’s work on Instagram HERE or via his Big Cartel HERE, where you can pick up some patches & pins, as well as some of Bruck’s older custom work.