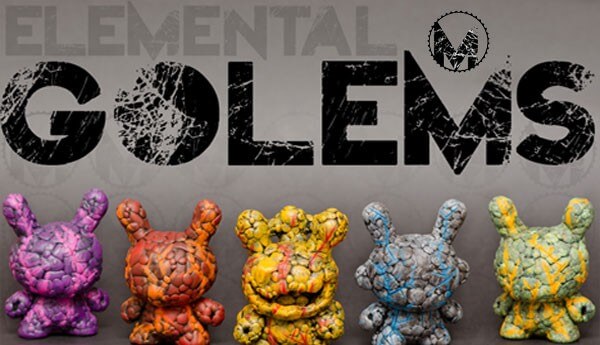 Snooping around on the net as you do, we came across some custom Kidrobot Dunny’s by customiser Joshua Mason AKA Mind of the Masons. We are used to seeing  Mind of the Masons customs being robots/ mech like customs but these Elemental Golems are something totally different from him. These are not just dope customs they have a brilliant story behind them.

Elemental Golems are tiny, magical beasts forged from raw power and rock like substances. These Golems are simple minded and bound to a code to protect the Rockrelics of their elemental power source. They typically travel alone, but occasionally they group with other Golems when near these powerful relics. If a relic is destroyed, it could potentially kill all of the golems of that element within miles. This is why these Golems are very protective of their lands and territories.

There are thousands of relics throughout the lands, with many elements powering them all. It remains unknown of how many elements drive these Golems, but there are some more commonly seen…

Earth Elemental: Golems of the earth element call upon the roots and soil, the simple ground they stand on for strength. They tend to encapsulate themselves in thick jungles or heavy forests allowing them to keep guard standing stoic within their solitude. Fire Elemental: These hot tempered Golems burn with a great fiery chaos, scorching the land with every step. Their aura emits such an extreme heat that at times they can set fire to about anything just by standing close to it. Ice Elemental: The slow and clunky Golems of the Ice element can freeze time itself with paralyzing auras. Creating chilling needles that penetrate the body and halting the mind. It’s beyond rare to see them travel beyond whatever tundra they’ve deemed home. Radiant Elemental: Blinding light glows from within, granting the stones bound to these Golems to shine. The radiant power from the sun drives these creatures, giving them great speed and energy. Void Elemental: This element embodies the dark, empty pockets of time and space. Black and Purple haze sweeps the land where ever they reside. They are capable of creating small rifts to alternate lands, giving them the power of teleportation. “At some point I plan to make it more of an immersive concept with maps detailing territories of each elemental type. My grand scale idea is to merge all of the customs I create into one massive world. The Robots, the creatures with glass eyes and these Golems. I’m a big fantasy nerd so figuring out a way to create a story with the customs I create is something I consistently think about. “

On that bomb shell we cannot wait to see this world too!

Some of these are sold out and are commissions, but the good news is Joshua has just opened up his commission list again, so you can drop him a line and get yourself a custom.