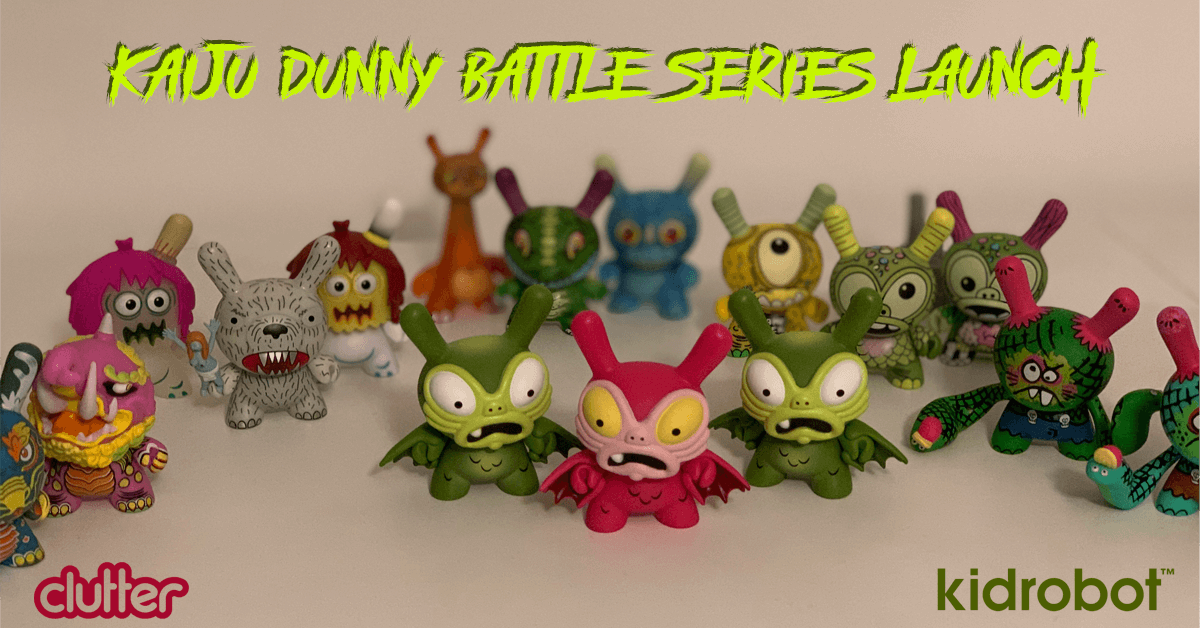 Straight up WARNING, you’re going to see the GREATEST ever Kidrobot Dunny accessory within this post, and you’re going to be blown the fuck away with it. Ha. Coming this Friday is the launch of the Kidrobot x Clutter new multi-artist Dunny series – KAIJU DUNNY BATTLE! The Toy Chronicle got our kaiju mitts on this series last month for a preview, and to say we was overwhelmed with joy, would be an understatement! Lets show you, so you can share in this joy too.

We’ll start with our favourites from this awesome new Dunny series! The Baby G Greasebats designed by Chauskoskis x Jeff Lamm. Available in green (2/24) and pink (1/24) versions. Each comes with wing accessories. They look freaking aces together as a pair. We actually opened four of the green versions from a case of 24, so we go real lucky that we have a pair of green to sit with the pink version, along with one on our work desk and one was given away to a special bearded Uncle.

Candie Bolton joins the Kaiju Dunny Battle series with two designs of her own. One of which has two colourways – the wonderfully sculpted tusked elephant design. A pink chase version with 1/72 and a blue (1/24). Secondly, Candie also has the four legged detailed Japanese Dragon Dunny which you can see in the images below.

We didn’t find the 1/24 tusked elephant, but you can check out our short Youtube video below where we unboxed our first Kaiju Dunny Battle blind box to find the 1/72 pink elephant! Nice start to the case!

James Groman gets his first THREE Kidrobot Dunny production figures in the Kaiju Dunny Battle series. The green scaled beastly fellow in the centre of our images below is the 1/96 chase figure of the series. Again these designs are very detailed and the contrasting colours of Groman’s designs help to make each of them pop that little bit harder.

Now we are going to show you the GREATEST ever Dunny accessory known to mankind! It comes with one of the Rampage Toys (2/24) Dunny which you can see below. Ha. We laughed out loud for far too long when we opened this hairy beast with his mistress. It’s definitely a standout moment for the history of the Dunny series.

Rampage Toys has two additional Dunny designs in this series. Again with two colourways of the design – one of which is a GID (3/48) and the other being (1/24).

Bwana Spoons brings absolutely some of the crazy ass Dunny designs you’ll likely ever see. SNAKES AS ARMS! Yup, ONE SNAKE IS WEARING A FUCKING HAT! Delirious! Blew our little minds when we opened up these two designs (2/48) and (3/48). There is a third colourway of the Bwana Spoons design in a nice orange colour (2/72) that we didn’t open to complete the trio of SNAKE HANDS!

To top out the series we come back to Jeff Lamm with FOUR designs in this series. Bringing the iconic Greasebat to the Dunny platform, Jeff and the guys at Kidrobot & Clutter have done a fantastic job with these designs.

Clutter are hosting a special KAIJU DUNNY BATTLE Release Party this coming Friday 15th February in NYC (815 Broadway from 6pm to 9pm). Where James Groman, Jeff Lamm, Rampage Toys and Bwana Spoons will be in attendance as they launch this great new Kidrobot Dunny series. I was super sceptical when I first saw that a Kaiju Dunny series was to be released, as I wasn’t sure how Kidrobot could capture the Kaiju style on a Dunny platform, but by gawd they’ve proved my 10000% wrong. They’ve absolutely killed it and I have fallen in love with this series once I started opening the blind boxes. The designs, new sculpts, those SNAKE HANDS, that accessory, the colours, the artists involved have all surpassed my expectations. I can see this series being an absolute blast for collectors of Dunny and Kaiju style designs.

The Kaiju Dunny Battle Series will be released at 10am MST (5pm GMT) on Friday 15th February from the Kidrobot.com store. Other Designer Toy retailers will also have these available so definitely check out myplasticheart, Tenacious Toys, Strange Cat Toys, Mindzai, Martian Toys, IamRetro and Collect & Display on Friday to get your blind box fix!