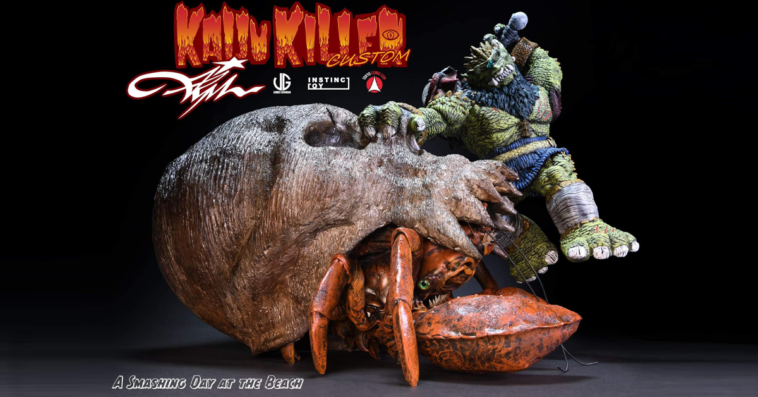 This is a smashing day indeed. Has there ever been a day where the Designer Toy Award has been announced so early, before the year has ended? Today should be that day. We should celebrate by going to the beach. A smashing day at the beach! Just so happens that A Smashing Day at the Beach is the name of this fuckin’ insane custom Killer Kaiju by J*RYU and thus the winner* of the DTA Custom of the Year 2020.

*Ok, so not the 2020 DTA winner, yet, but come June 2020 we can pretty much all agree that A Smashing Day at the Beach custom by J*RYU will be in the running to take down the Custom of the Year award. Following up on his DTA win in 2019, J*RYU has doubled down and once again worked with the guys at Instinctoy as part of the Custom Killer Kaiju show at Tokyo Comic Con next weekend.

Standing at over 20inches tall, this absolutely terrifyingly awesome custom is like no other. It’s a story unfolding before our very eyes. We are urging the piece to move, to come to life, to complete the sequence of battle. WE WANT TO KNOW THE OUTCOME, GODAMNIT!

Soak in the images below and let us know what you think in the comments!

This is an homage to Frazetta, Kirby, Harryhausen and many others who injected so much life and power into their works. I was hoping to capture the idea of these creatures, living and breathing, within their worlds as they battle for dominance. This is also a sequel of sorts to an older piece I did, in that it marks the return of KING KRAB ONE, who outgrew his dumpster shell, found a huge kaiju skull as his new home and is now known as EMPEROR KRAB ONE.

If you are interested in purchasing A Smashing Day at the Beach by J*RYU, you should drop a message to @instinctoy_hiroto_ohkubo 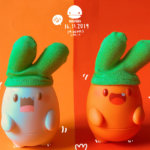 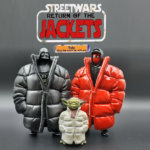