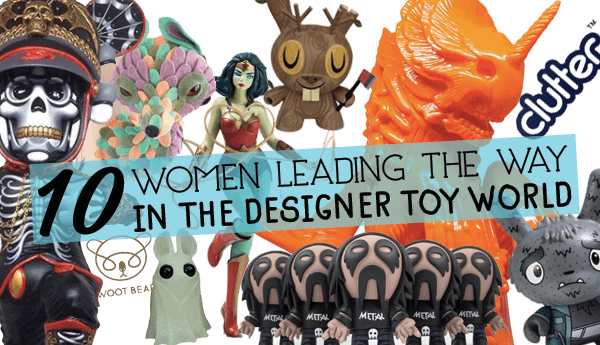 It could be argued that the Designer Toy scene is male-dominated, and it’s hard to argue with that fact when you consider the Finalists of the 2017 Designer Toy Awards as an example. From our rudimentary math, there were 180 finalists, only 30 involved women. From 18 winners on the night, only 2 were awarded to a female. Candie Bolton took down both those awards (DTA Break-Through & DTA Best Sofubi). That’s incredible. Incredibly sad, as there are so many talented, influential female artists & contributors to the Designer Toy scene we all love. We wanted to celebrate those artists that deserve recognition, the respect that their male cohorts receive. For our latest TTC Spotlight feature, we have highlighted ten female artists that are leading the way & paving a path for future generations of women Designer Toy artists. Enjoy… 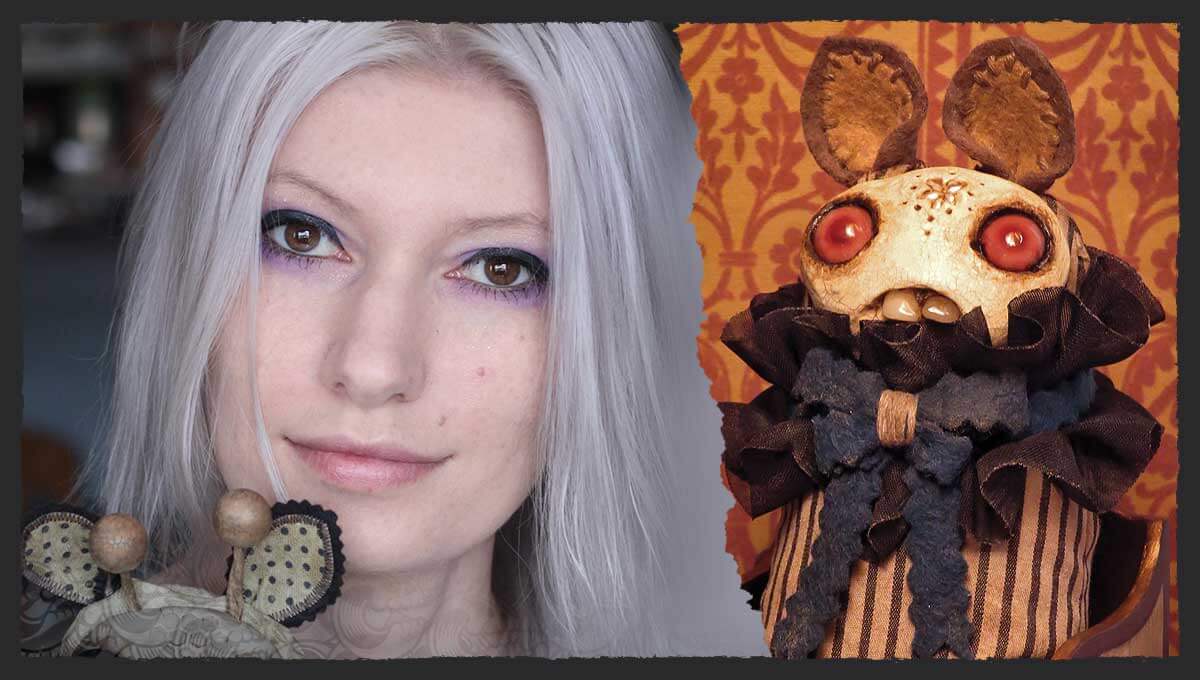 You could possibly forgive the fiancée (congrats btw!) of Chris Ryniak to take a back seat in the Designer Toy relationship of the Spayd/Ryniak household, but not Amanda Louise. Constantly crushing it with her design & sculpt work, Amanda is her own defined, unique entity when it comes to her beautiful work. Building up a mass-following of eager fans, Amanda inspires us all with her endearing pieces of art. 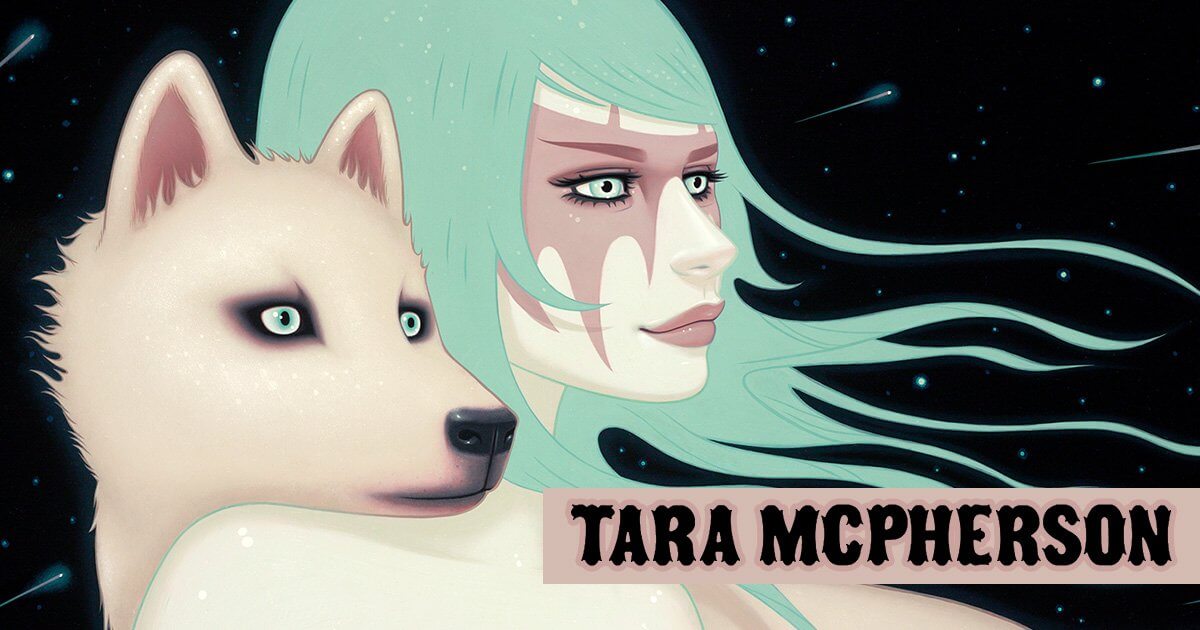 Tara probably created a path for most/all women in Designer Toys. Working with Kidrobot since what feels like the dawn of the Designer Toy boom, Tara is right up there with the iconic artists that have worked with Kidrobot and beyond. Her work is synonymous with the best and has stood the test of time over the past decade or so.  Working out of her Cotton Candy Machine studio in NYC, Tara works heavily in 2D artwork but when she dips her toes in the 3D world we know that we always going to be impressed. It’s really great to see Tara work again with Kidrobot in recent times with the Wonder Woman figure (our bet on DTA Best Licensed 2018) as well her work re-inventing the Care Bears series with Kidrobot (read HERE). Long may Tara reign as the Queen of Designer Toys!

Check out the works of Tara on Instagram: @taramcpherson 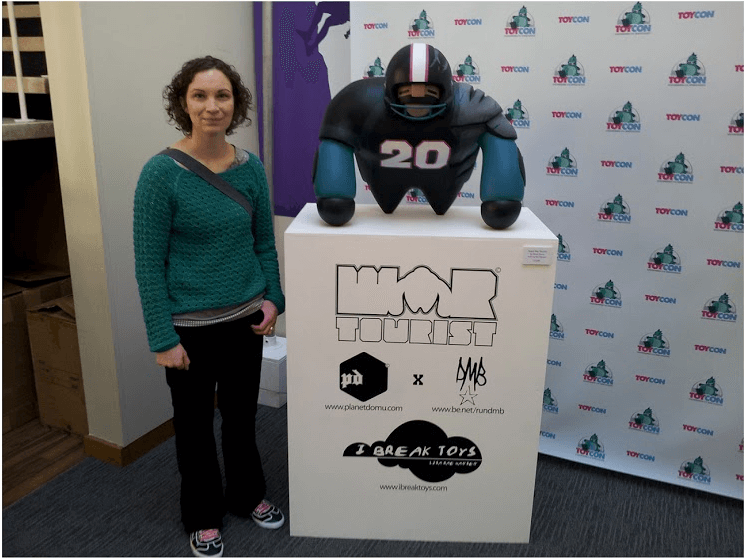 We first discovered Lisa’s work at ToyConUK 2013! The very first ToyConUK! Time has flown since, but in that time we have grown to further love Lisa’s work (and Lisa herself). Lisa is creating a special wave of original characters & custom work up in Scotland. Making the UK proud of her incredible work & character. An absolute darling. A joy to call one of our friends. 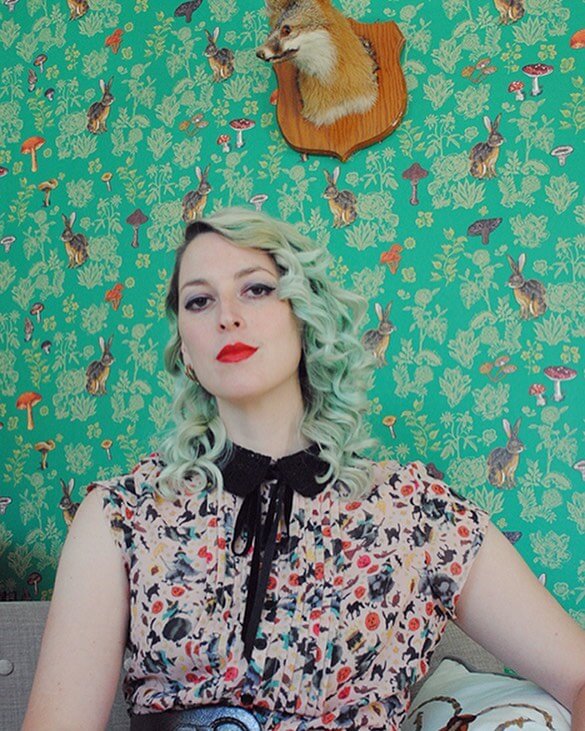 Whilst Jordan’s work as part of Horrible Adorables is cutesy and well… adorable, if you spend any amount of time talking with Jordan you can quickly get a sense of what a strong character she is. A solid sense of style, it’s no surprise that Jordan has gone from DTA Break-Through 2016 to a stalwart of the Designer Toy scene in such a short space of time. She does have a little way to go before she is any kind of World Ten Pin Bowler Champion though. Ha. Roll on DCon 2018 for a rematch.

Jordan can be found with her Horrible Adorables on Instagram: @horrible_adorables 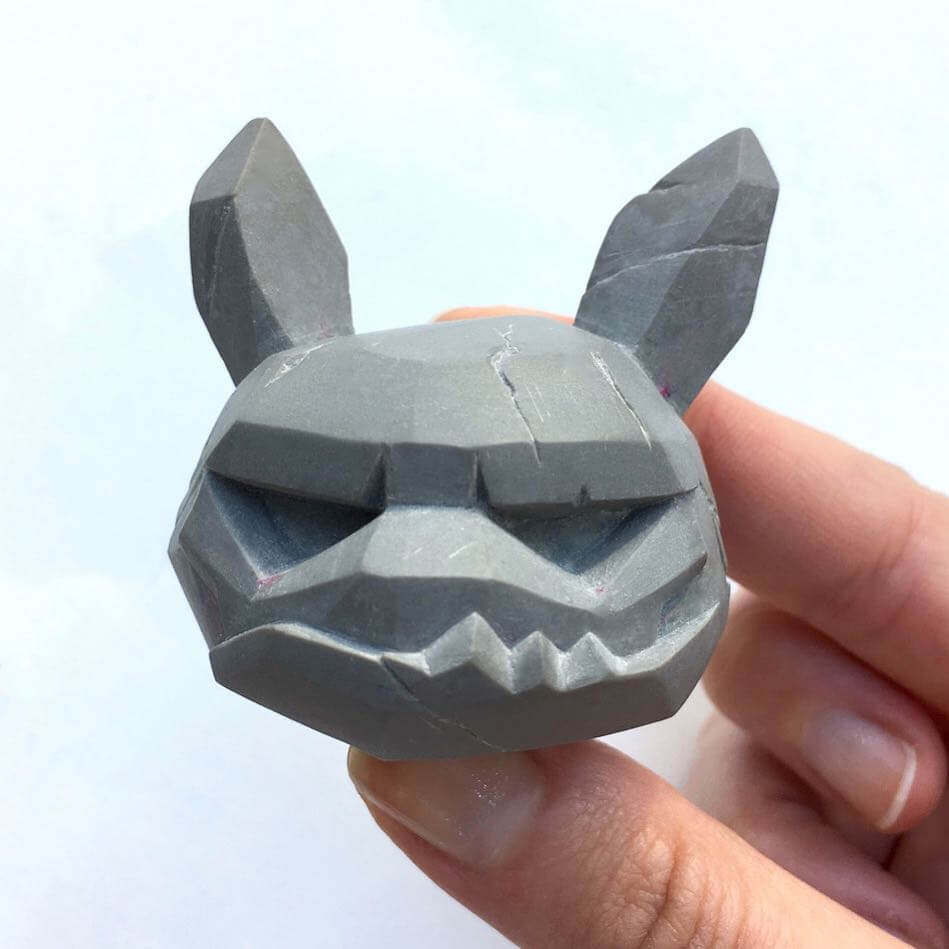 One of THE best sculptors in the Designer Toy scene is Seriously Silly K. Hands down, no one really comes close. K’s work is incredible. If you’re not following Seriously on Instagram HERE, you’re missing out. Working in the background by sculpting most releases that you’ll recognise, Seriously Silly K has created a renowned name for herself. Rightly so too. Working with top artists from around the world, Seriously Silly K is THE ONE to go to if you need any sculpting. Fact. 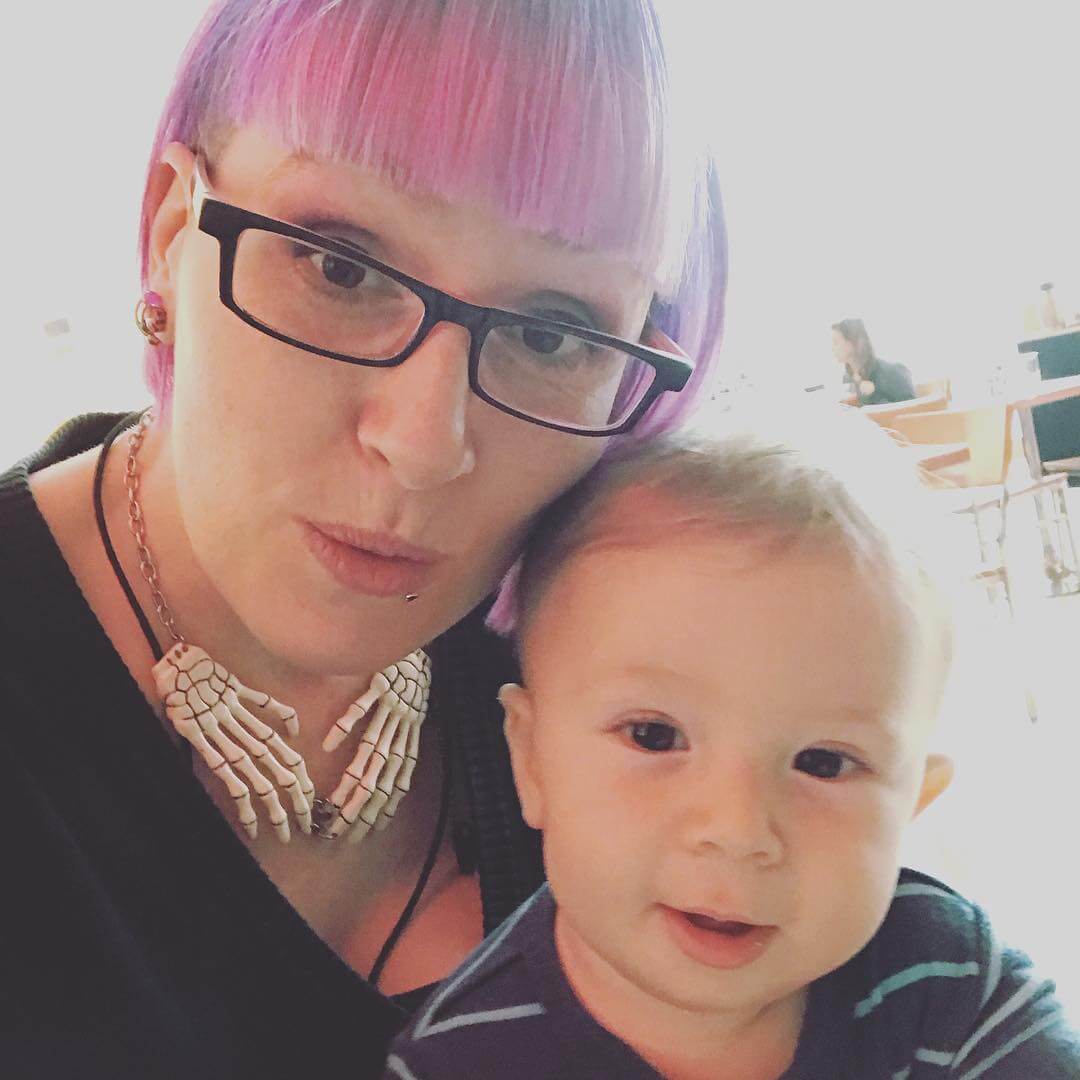 I don’t think anyone would argue if we were to say that Miranda is one of the hardest working persons in the Designer Toy world. Running & owning Clutter Magazine/Gallery should be a mean feat in itself but Miranda is also the brains behind the Designer Toy Awards and, in recent times, also the Five Points Festival in NYC. Mother to three gorgeous kids, as well as keeping American Gross in check. It’s more than fair to say that lots of shit wouldn’t go down if it wasn’t for Miranda. Check out Clutter Gallery & Five Points Festival on Instagram. A lass from Coventry killing it in the US of A! #UKProud 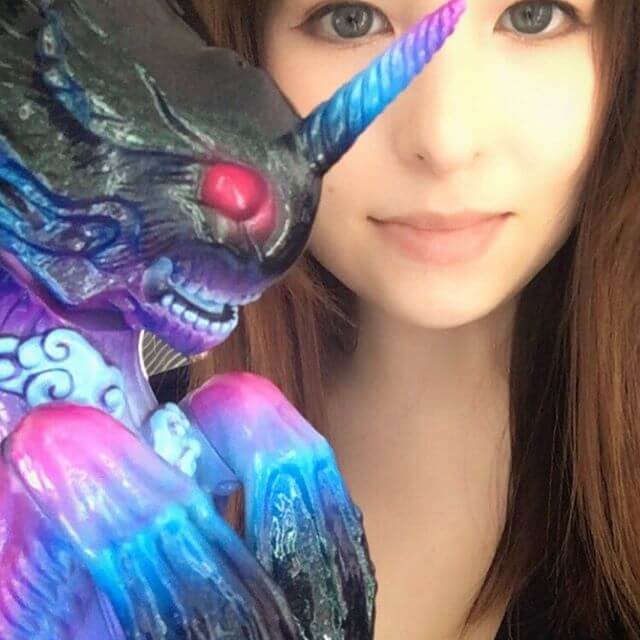 Working feverishly away for the last few years, Candie saw her work rewarded in 2017 when she took down the Designer Toy Award for both Break-Through Artist and Best Sofubi, as we mentioned at the prologue of this TTC Spotlight. Much deserved recognition. However, that wasn’t the time for Candie to sit on her laurels, nope. Candie has been working relentlessly since and built on the reputation for her skilled colourful custom work as well as the Bake Kujira sofubi figure which has taken the Designer Toy world by storm. Her latest production work featuring in the City Cryptid Kidrobot Dunny series (read HERE) is a beautiful testament to her work. We can’t wait to see how this progresses over the Summer. Definitely a highlight of the City Cryptid series in our eyes!

You probably already do but check out Candie Bolton on Instagram: @candiebolton 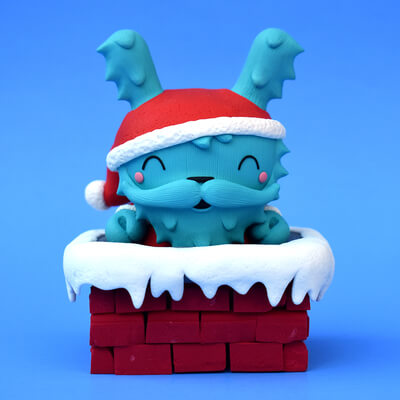 In recent times, everything is golden for Jenn Bot of The Bots. A crazy popular Kidrobot Dunny series released last year (read HERE), which followed the success of her Kickstarter with UVD Toys to bring their Luna figure to life. We’ve recently seen that the Luna character shows no sign of slowing down with their second successful Kickstarter campaign. So much positivity flows from Jenn and her work with The Bots. You can see it seeping through her work. Even when Jenn’s custom has a sad face, it still makes our heart melt with comfort. 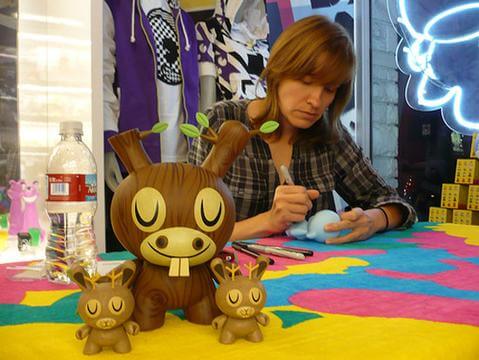 In the similar vein as Tara, Amanda has created her own glorious path in the Designer Toy world but also established a route for other female artists to follow. Working with her own brand of art, as well as multiple collaborations with Kidrobot & Coarse to mention two, Amanda is at the forefront of the Designer Toy world. Creating wonderful pieces of art that sit in the collection of those that Amanda looks to inspire the most – young females. 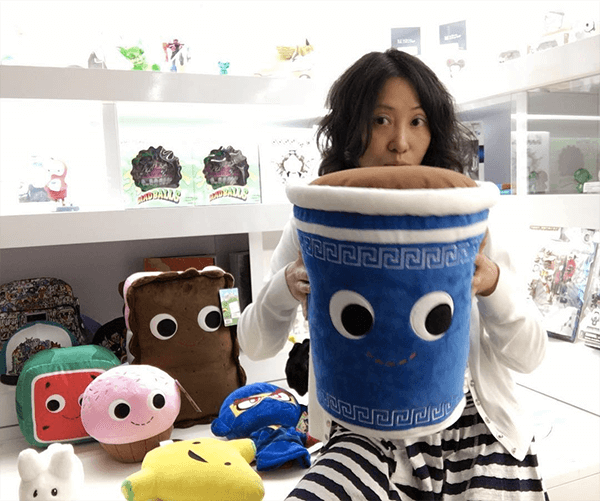 A no-nonsense character, Korena is the face & life of Wootbear in San Francisco. Whilst she may be short in stature, Korena is HUGE is personality & character. An absolute joy to be around. We’ve had so much fun spending time with Korena over the past few years as we’ve travelled over to the States to visit Designer Toy conventions. If you want one person by your side in the post-apocalyptic Designer Toy world, look no further than Korena.

Some love can be shared at the Wootbear Instagram: @wootbearbelly

We’re not writing this blog post to put these ladies on a pedestal they don’t deserve. Each & every one of them work damn hard to be at the forefront of the Designer Toy scene. Huge respect to all the women we’ve mentioned above. Actually, HUGE respect for ALL ladies in the Designer Toy world making a name for themselves.

How can you show them the love & respect they deserve? Well, there is still plenty of time to nominate your favourite female artists in the 2018 edition of the Designer Toy Awards. You can head on over to DesignerToyAwards.com and make your nominations known before March 12th.

Thankfully, it’s not only The Toy Chronicle that are thinking about powerful women in the Designer Toy community. Our pals at Martian Toys/Mothership Toy Gallery are hosting a custom Toy gallery show this coming weekend in Philadelphia. Lysistrata highlights the power of women and spotlighting the incredible female artists in the Designer Toy community and beyond. We’ll bring you more details later this week on the show and the artists involved. 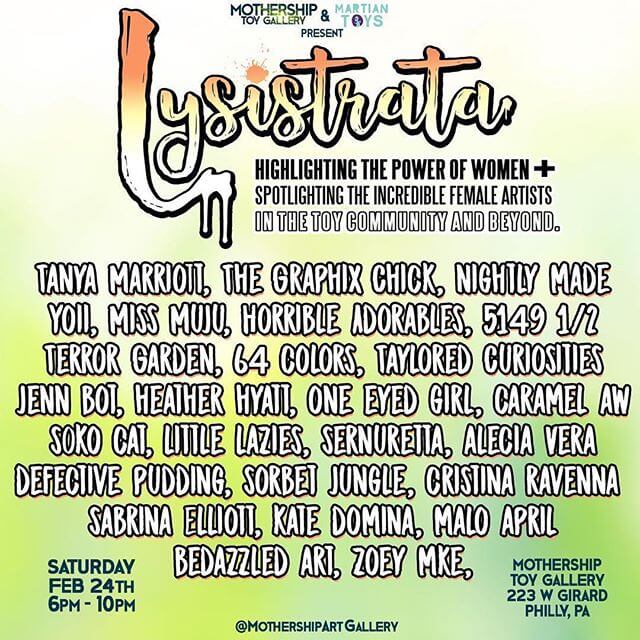 For future TTC Spotlights, as well as all your Designer Toy news & needs, check out the TTC Mobile App on your favourite smartphone devices. Available to download for FREE right about now…