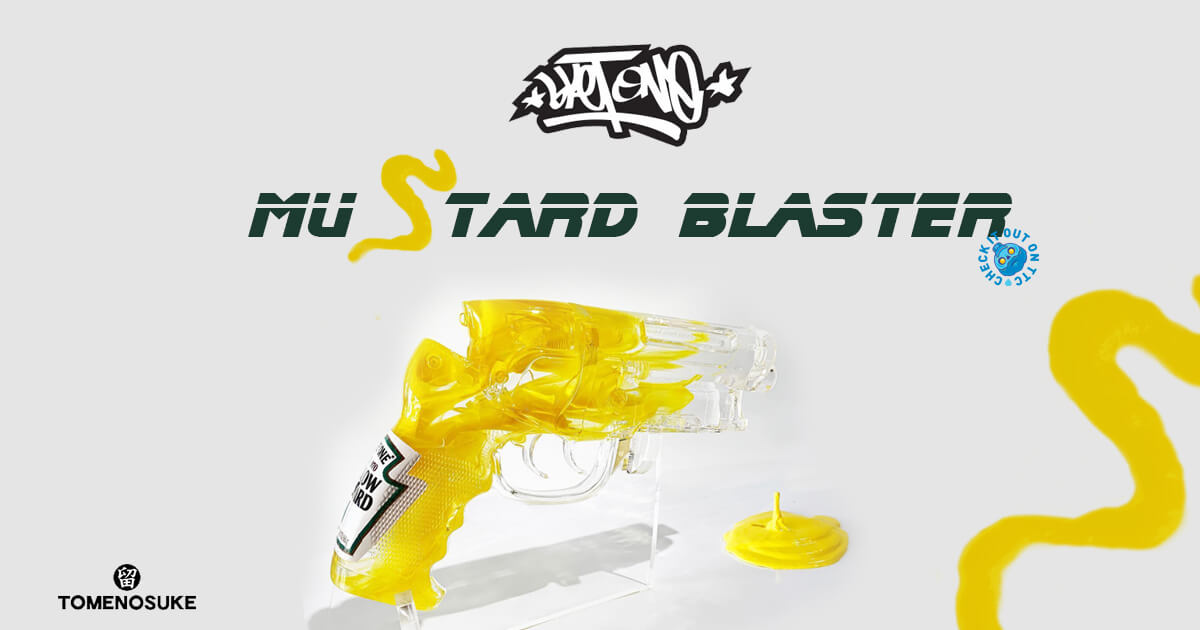 Last year we saw the mighty SketchupBlaster by Sket-One x Tomenosuke! To celebrate Tomenosuke all-new TOMENOSUKE International store, Sket-One and Tomenosuke team up to bring you Yellow Mustard Blaster! Condiments at the ready! Designer toy veteran, Sket One makes his mark on Tomenosuke‘s Blaster stunt model kit. Tomenosuke asked Sket to give his signature style to the blaster and Sket One does what he does best! Loving how Sket One has added the end of the bottle effect.

To commemorate the evolution of the online store, Tomenosuke is releasing the
Yellow Mustard Blaster by Sket-One (display stand included) This is the second edition and mustard version of Sket’s popular piece that was sold through advance orders last December. Pre-sale starts: 23:59 on June 1st / close: 23:59 on June 8th JST. / ships September 2020Price: 66,000 JPY at https://tome-international.stores.jp/

Sket has some goodness which is more to our budget like caps, pins and much much more which can be found at

Check out the full info at https://tenshu53.exblog.jp

Sket One is an American artist. He was raised in New Haven, Connecticut. He started off his artistic career as an American graffiti artist in the 1990s he created and ran Unitee Clothing, a shirt design company while looking for full-time work as a designer. He eventually landed a position as Creative Director for the Silverman Group.

THE HUSTLE – A series of short interviews that feature artists, directors, actors, chefs and other creative people to help inspire the next generation of young creatives. It’ll be focusing on their backgrounds, processes, inspirations, future goals and past struggles. For us low riders.