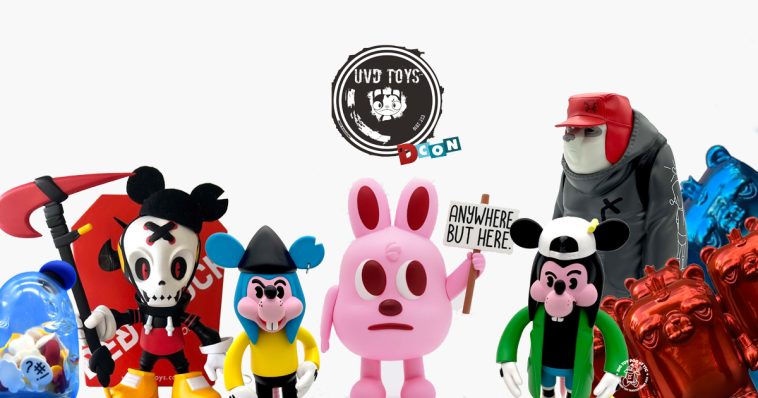 THIS WEEKEND will see UVD Toys back at DesignerCon! be prepared for some amazing exclusives from JC Rivera, ChrisRWK, Chogrin, KwestOne, and more! UVD Toys will also be featuring an art show with ChrisRWK “From Sunrise to Sunset” which will feature new original pieces on paper and custom versions of some of our most iconic toys! UVD Toys will also have some custom pieces from The Bots, DrilOne, and many more! Also, be on the lookout for some prototypes of what UVD Toys are working on in person. Below is a little teaser of what’s going to be at UVD Toys booth.

Mike Fudge and ChrisRWK have teamed up for an epic release on the Kub platform! ChrisRWK turns the Kub in a 90’s NYC Hardcore kid in a Robots Will Kill hoodie, jeans, red cap, and patch covered camo backpack.

This 7″ vinyl figure is limited to 125 pieces worldwide and will launch at the UVD Toys booth for $95 each.

UVD Toys are excited to announce its DCon 2022 special edition of JC Rivera Standing Strong The Bear Champ! These hand chrome painted 4″ vinyl pieces feature a reflective finish that really pops! The SLAB edition of the popular figures is limited to just 10 Red and 10 Blue.

If you have been collecting this series you aren’t going to want to miss the chance to own these for your collection! These will be available exclusively at UVD toys boot for $300 each!

Chicago based artist Blake Jones brings his iconic Buny to Designer Con! UVD Toys are excited to launch the long awaited pink edition of the 7″ vinyl figure. Holding his picket sign proclaiming “Anywhere But Here” this release is a must have for any Buny collector!

Chogrin has turned Jay & Silent Bob into MallRats! This time the duo is set to Strike Back and are headed off to California to make an appearance at Designer Con 2022.

This edition of the 7″ vinyl figure set is limited to 100 sets & will be $150 per set. Officially licensed Jay & Silent Bob Products!

UVD Toys & KwestOne are excited to drop something special for Designer Con 2022! The DED STOCK 90 Anaheim edition is limited to 50 pieces world wide and will only be available at Booths 2519 & 1331! This 4.5″ vinyl figure comes packed with extra goodies! Stickers, Collector Card, Patch, Pin and flocked Anaheim Rat Hat, with real chin strap!

These will be $80 each with a limit of one per person!

UVD Toys is excited to bring another custom edition of Brian Ewing’s 3″ Ghost Boner to life! As a follow up to The Bots popular “The Happiest Boner On Earth” from 2021 they now present you “Donald F#ck”!

This edition of 10 hand sculpted pieces will be available at the UVD Toys booth for $100 each. While supplies last so don’t get there late! 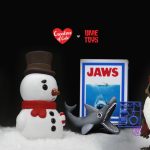 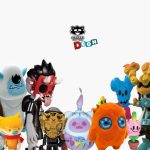