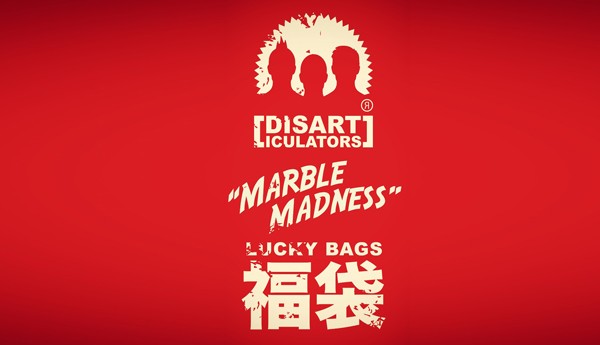 Wednesday, January 28th marks the latest Disarticulator sale! “Marble Madness” Lucky Bags plus a few extras up for grabs. As the name would suggest, each bag of keshi goodness is set to feature a number of one-off marbled figures spanning the past two and a half years of Disarticulator releases, including guaranteed large (Rotten Tomato) and medium (Leucotomy Ball) sized figures as well as 2 standard scale keshi (from a choice of the Atomic Uchuujin, Lobsterman or Critter)- each and every one hand sculpted by Zectron and produced in a glorious keshi-style rubber by Tru:Tek. Due to go on sale in the Man-E-Toys store. Wednesday, January 28th at 9pm London time, the “Marble Madness” Lucky Bags – limited to an edition of just 8 – will be up for grabs at the bargain price of $100 (around £66 )each plus shipping- over 25% off individual retail!

But that’s not all… On top of the bags, there will also be a number of other figures available on the drop, including a new one-off marbled run of SKC’s Screwballs! Based on an illustration for Strange Kids Club’s ongoing Circle Jerks sticker line, the stunning gross-out sculpt was originally undertaken by artist Jose David Cifuentes Ulloa as a fan project, quickly sparking the interest of SKC editor, Rondall Scott III, and ultimately leading to a full scale toy release. 3D printed, prototyped and produced courtesy of Tru:Tek over at Disart ToyLabs, the 3? x 2? rubber figure has been cast in a variety of 2, 3 and 4 color marble mixes this time around. Limited to just 10 figures priced at a bargain $35 ( £23)  each plus shipping, the one-off marbled Screwballs will be joining the Lucky Bags – plus a few other goodies – in the Man-E-Toys store next Wednesday…”
www.manetoys.bigcartel.com