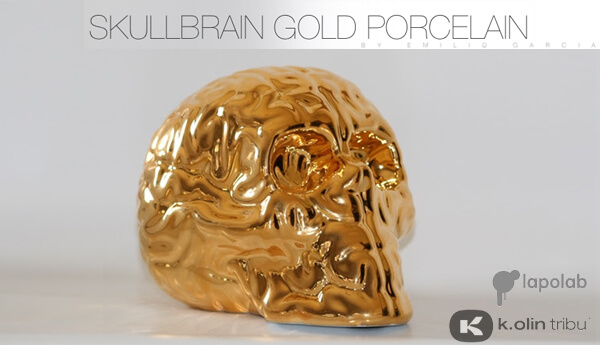 It’s been a while since we’ve seen a release from the French porcelain masters K.Olin tribu. Saying that it doens’t mean that they’ve been slacking. Far from that as they have been preparing another release with Emilio Garcia!  After 4 versions of the porcelain Skullbrain which have encountered huge success, it’s time the Skullbrain had some added BLING factor with one of the most precious metals in the world: GOLD. Skullbrain GOLD is the ultimate version, entirely covered with gold. 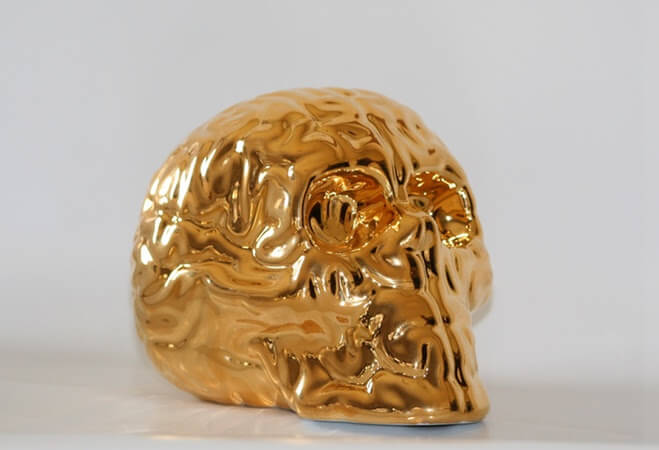 “Emilio Garcia was born in the winter of 1981 near Barcelona, Spain. He has a long career trajectory as freelance art director and visual artist. Since 1999 he has worked with such well-known international companies like Berlitz Kids, Hitachi, Diesel, Inditex, Metro, Vans or The North Face among others specializing in motion graphics and multimedia content. His work is published in Taschen Favourite Websites and Web Design Index Books.”

Emilio, concerned with the digitalization of our society, saw his culture moving slowly away from the tangible. As reaction to this, he left his multimedia career and embraced the tactile. Drawn to the fascination of plastic, he started a new stage with the Secret Lapo Laboratories, a space for plastic experimentation, where he can give capacity to his artistic restlessness, far away from bits, clicks, databases and scripts. Out of this desire to make form with his own hands, the Jumping Brain viral was born. As his first independent project, the Jumping Brain has become an overnight sensation.

Made in Limoges , France certified.

The output of this version is planned for Thursday, February 11, 2016 at 6PM Paris (12PM NY, 9AM LA, 1AM Tokyo )
We suggest you use http://www.worldtimebuddy.com/ to find your timezone.

You can find SKULLBRAIN GOLD over at http://www.kolintribu.com priced at €600. (Save 20% for non EU costumers, create an account and enter an address to see your price)

This version is very limited: 15 copies only .
Now the party is entirely hand-painted.
SHOP : www.artandtoys.com

You can check out Emilio work via his