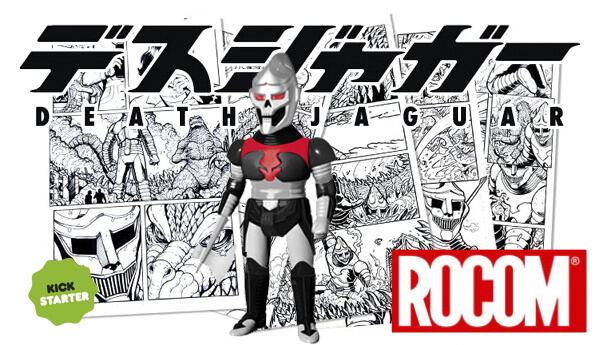 From time to time projects appear on Kickstarter that get us really excited and emotional. This is one of those times. Some of us here at TTC are passionated about the ‘golden era’ of toys, such as the Masters of the Universe, Transformers, vintage Kenner toys and all that pop culture that got us out of bed early on those Saturday mornings that tasted like sugary cereal. And of course, kaiju and giant robots. Oh yes, TOHO movies, super sentai and all that. We are sure many of you are too. A throwback to simpler times, happy times, in fact those times might be the reason some of you are reading this blog.

When we first laid our eyes on this project we were hooked, not only for the awesomeness and quality of the content but for the passion, work, and amazing concept that’s behind it. We were back in front of that TV eating our cereal bowl like tiny Godzilla’s. That’s the power of ‘Death Jaguar’ by Rocom, get ready;

Rocom is a well established talented illustrator, artist, rapper, producer and male model (okay, maybe not a profissional one, but he could if he would). He’s been on the toy industry for nearly 10 years, working on projects for some major brands like Star Wars and Spider-Man. Like us he always had a passion for collecting toys and now he decided it’s time to make his first soft vinyl toy. Meet ‘Death Jaguar’; Death Jaguar will be an epic 9” soft vinyl figure made in the style of the classic Japanese kaiju toys. Features a dual-face head sculpt and fist replacement weapons including an axe, and a laser blaster.

This toy simbolizes the culture Rocom grew up on and still loves to this day. We got to say we were simply blown away by this design. In our opinion captures perfectly a crossover between eastern and western pop cultures. On one end we get that vibe from the Japanese epic world of giant monsters and robots, and on the other the warriors such as He-man, Skelletor and all those bad boys! There are 3 blank color options and 2 painted editions on the horizon. There will be an Astro-Gray, Jet-Black, Aqua-Blue, Standard color-way, and Tribute color-way;

You can support the making of ‘Death Jaguar’ in several ways, and all the tiers unlock amazing extras, from $1 to $500. Coloring PDF books, MP3 download of the song “Never Say Die” by Boombox Ninjas, kickstarter exclusive enamel pins, embroidered snapback hats, original artwork, resin mini-busts and even original art by Matt Frank from IDW’s Godzilla: Rulers of Earth Comic Book.

So yeah, go check out the rewards and goodies and support this project on Kickstarter HERE, we know we will. Let’s make ‘Death Jaguar’ a reality.

Thank you for this Rocom!