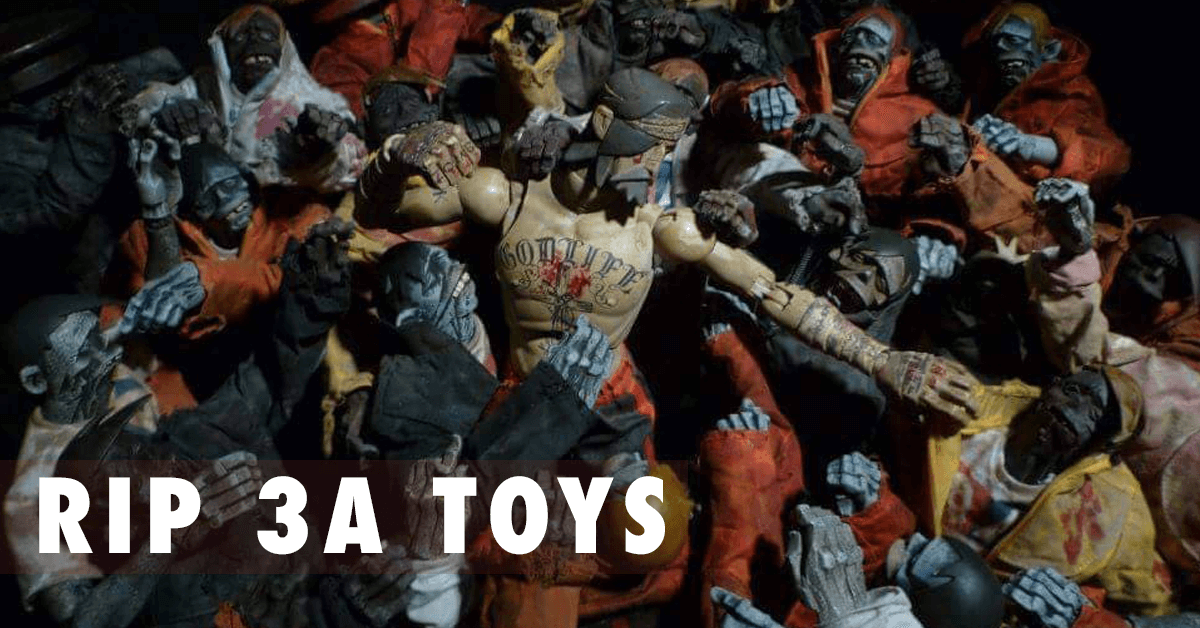 It was announced earlier today from Ashley Wood that 3A Toys would no longer exist. Following a statement (below) we have some words from a 3A Toys fan on his thoughts of this ending. Check it!

Thank You for Everything.

The era of 3A is coming to a close. Kim and I are forging ahead in different directions. I wish Kim nothing but the best on the journey he is taking Threezero in and I’m grateful to have spent so many years in the trenches with the man. I’m proud of what 3A has produced and accomplished these 11 years. It’s been a sincere honor and privilege to work with all of the 3A crew, past and present. My journey, my art, and my worlds, however, are heading towards new frontiers with head held high and brush in hand.

And to the fans – Thank you. 3A could not have been what it was without you.

Rest assured – this is not the end, it’s another beginning. The band remains the same, only the label is changing.

See you in the Underverse.
– Ash

We spoke with Simon Be, a member of the Albion on his thoughts on 3A from the beginning and how he feels about the end of 3A Toys. Simon doesn’t hold back and has his say. Sometimes when you’re heavily invested in something the passion flows. It is clear from the below that Simon was and probably still is passionate about 3A Toys. Take a seat and enjoy!

I’m sad to announce the death of 3A toys, the life support was finally switched off after a long battle with creative cancer and artistic ennui on the 30th of June 2019.

Birthed in 2008, 3A Toys was the bastard vinyl son of Ashley Woods distinctive artistic genuis and the incredible creative vision of Kim Fung Wong. 3A spaffed onto the designer toy scene on 25th of June 2008 with the drop of one of the most iconic figures I’ve never owned and rarely fondled.
Nom De Plume .

12 inches of limited edition, particulated toygasm, Nom was torn from the pages of World War Robot, one of a herd of outstandingly unique creations that centred around an imagined future of robotic mayhem.

Whatever else Ash may be, he remains one fuck of an artist, his oils are stunningly beautiful and he can sling ink like a small god.

The aesthetic of 3A toys still drives people wild today. An urban street vibe coupled with filthy weathering, taut lines and a visual presence that has the gravity of a moon.. (AND THAT SMELL BY FUCKING CHRIST!!)

Ash already had a dedicated crowd due to his work on metal gear solid, comics like Popbot, Automatic Kafka, Zombies vs Robots and of course WWR and Lore (Google it, fuckwads!).

Once word got out that Kim and Ash were cooking vinyl that dedicated crowd quickly became the nucleus of the fabled 3A legion. A small forum was formed (The 3A Hyperboard) and the rest was history.

Well, it was to me and a few hundred other assorted geeks from across the planet.

What followed was a brief but glorious time of online madness, financial mayhem, toy heaven and more emo than you could beat to death with a rotten monkey.

If you wanted to buy 3A shizz 2nd hand back then you a hell of a time tracking down the few items out there.

It was either eBay, the kidrobot forum or the Hyperboard BST. You risked the usual bumfuckery of scalpers and gougers, but man the rewards were worth it.

Then there was Bambaland, the sales site from hell. Ash would gleefully drop his wares with little or no notice, (usually 2am ish UK time) and a meagre amount of figs would be digitally fought over by the many.

It was usually an epic cluster fuck, a feeding frenzy of crack addicted geek sharks vying for the only slack that mattered.

The site would crash, cart jacking was a common ball ache but it was all glorious fun. During one drunken drop I rushed to take a piss scant minutes before kick off and trapped meself in my zip. Still I scored, eyes watering and cock bleeding.

Ash was on fire in those days, the drops expanded WWR, making some of the sickest vinyl ever to empty wallets, it also took in the fantastical popbot verse with the Tomorrow Kings, autistic, clone warriors bred to fight giant robots.

Ash then created a totally new IP, the eclectic world of Adventure Kartel, bringing out characters like the emo of adventure Tommy Mission and fighting JC, a zomb bashing cross between Jesus and Bruce Lee.

Ash had pure fun and so did we, creating worlds and producing some of the the most original toys ever to grace shelves.

3A was what got me into Designer Toys. Hell, toys full stop!

To this day I haven’t come close to getting a feeling like cracking open a 3A toy and huffing that heavenly, toxic melange of chemical dust.

Ash and Kim continued a phenomenal output and 3A just got bigger and bigger.

With it, small cracks appeared. Quality control started to suffer. Production times lengthened and on the boards dissent started to get out of hand.

What was once a cosy band of brothers got out of control, Ash’s ego didn’t help (the prick! :P)

Folk got too entitled sure but a small, crack crew of sweaty sycophants soon became gatekeepers and the fun drained started to bleed out like a chest wound (many of the OG legion started to get banned or purged from the boards, oddly enough mainly Brits), 3A’s digital presence grew and the whole show entered a more corporate era.

Ash also didn’t have much of a fucking clue about marketing which didn’t help. At all.

What he made up for in artistic genius he pissed away with a blend of stubborn twatishness, creative ennui and poor judgement.

Promising lines like the 2000AD license floundered like a dying hyper whale despite a solid fan base and the die hard fans of WWR were bludgeoned into despondency.

Stagnation set in and despite rays of sheer brilliance it seemed Ash could no longer be arsed.

Kim bought in some exciting new licences, Ash got obsessed with Paschas (Barbie meets manga) and 3A just chugged on, running out of steam whilst Kim went from strength to strength with his company ThreeZero.

Today’s news is certainly sad, but totally unsurprising, 3A has been vegetative for a good while now and I’m glad the plugs finally been pulled.

Perhaps Ash, now free of an albatross, can find new passion, Kim is still kicking it out if the ball park but it’s run of the mill stuff, lacking the aesthetic beauty and creative brilliance lacking the aesthetic beauty and creative brilliance that still sees 3A Toys being hunted down for big bucks by sweaty handed geeks all over the planet. It’s been an incredible 11 years all told and the most outstanding element of it all has been the legion itself, I have never known such generosity from a community of what amounts to total strangers. I’ve come to call many of them mates (and frequently cunts) and have had the upmost pleasure to meet some of them in the flesh, some have sadly died along the way and that grief has been surprisingly real and raw. Once when hard times struck, they raised money for me to get me out of temporary homelessness. Above all else I’ll be raising a dirty rum to them.

WHAT DOES THIS ALL MEAN?

Going forward all 3A branded licenses like Transformers and Destiny 2 will be produced and distributed by Threezero and carry the Threezero brand. Future pre-orders will be placed through threezerohk.com

All pre-orders made through Bambaland.com and WO3A.com will be honored by Threezero.

Beginning August 1st, 2019, 3A will close it’s online store for pre-orders. Please refer to https://www.threezerohk.com/shipping-schedule/ for the latest shipping schedule.

Please direct any questions about your orders to [email protected]