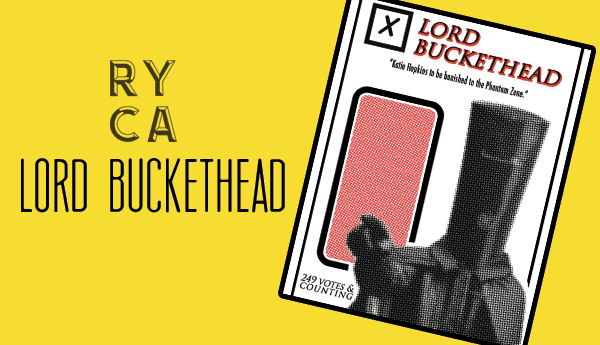 There were a number of heroes in the UK’s General Election last week but none stood out more than the almighty Lord Buckethead. Yeah, you read that right! Lord Buckethead stood for election in the constituency of Maidenhead – the same constituency as our current Prime Minister, Theresa Mayhem. Lord Buckethead wasn’t successful in dethroning the Mayhem one, but he sure captured the nation’s imagination. Now we may stand a chance to own the fantastic action figure if RYCA has anything to do with it. 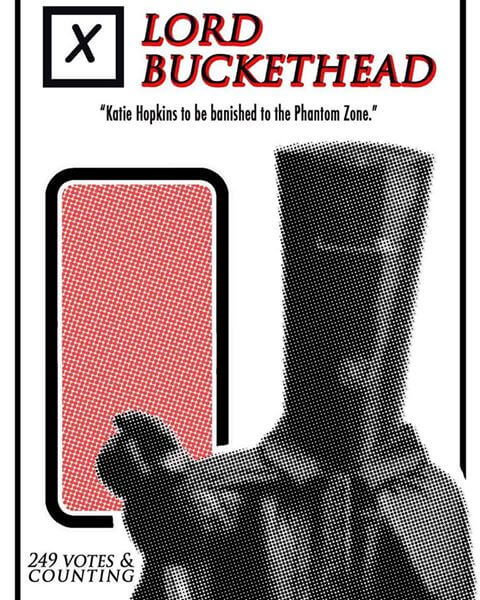 In a collaboration with Evan Morgan & Mike Strick, RYCA is planning to bring us the much needed, much wanted Lord Buckethead unofficial action figure. We don’t have any firm details, but RYCA posted the above image on his social media with the #comingsoon hashtag. We’ll bring you more details once they are known.

The Lord Buckethead 2017 Manifesto was a thing of beauty, check it below:

1. The abolition of the Lords (except me).
2. Full facial coverings to be kept legal, especially bucket-related headgear.
3. No third runway to be built at Heathrow: where we’re going we don’t need runways.
4. Ceefax to be brought back immediately, with The Oracle and other Teletext services to be rolled out by the next Parliament.
5. Regeneration of Nicholson’s Shopping Centre, Maidenhead.
6. Buckethead on Brexit: a referendum should be held about whether there should be a second referendum.
7. Nuclear weapons: A firm public commitment to build the £100bn renewal of the Trident weapons system, followed by an equally firm private commitment not to build it. They’re secret submarines, no one will ever know. It’s a win-win.
8. Nationalisation of Adele: in order to maximise the efficient use of UK resources, the time is right for great British assets to be brought into public ownership for the common good. This is to be achieved through capital spending.
9. A moratorium until 2022 on whether Birmingham should be converted into a starbase.
10. Legalisation of the hunting of fox-hunters.
11. New voting age limit of 16 to be introduced. New voting age limit of 80 to be introduced too.
12. Katie Hopkins to be banished to the Phantom Zone.
13. Stop selling arms to Saudi Arabia. Start buying lasers from Lord Buckethead.
14. Prospective MPs to live in the seat they wish to represent for at least five years before an election, to improve local representation in Parliament.
15. Free bikes for everyone, to help combat obesity, traffic congestion and bike theft.