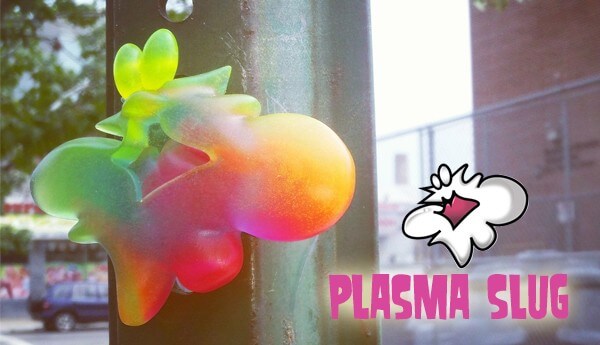 Our buddy Plasma Slug the graffiti / street artist has one mission and it’s pretty big, but we are sure he will do it. Here’s what he had to say.

“I have a great movement right now where I’m putting out resin custom made toys individually made by me into the streets of NYC in different boroughs. So far I have put over 100+ Id really love to branch into the toy world, not so much in the big league but as a well known graffiti / street artist paying homage to the craft of what you guys do and crossing the two worlds like a fusion.” We would like to see Plasma Slugs around UK streets. From graffiti to resin sculptures was a great transition, Plasma Slug has proved that the two mediums work great together. Having resin representation of his art around the world will be a major coup for Plasma Slug as something physical can be taken home, even if that wasn’t the idea but great marketing strategy. Plasma’s was a transported species from the planet Gliese 581 somewhere tucked in the LIBRA constellation, originally known to have been used as  an Alien’s traveler companion on distant journeys through traversable wormholes. Aliens would have a new time spent well during many frequent visits through different galaxies.

The Spaceships were able to travel 100 light years in about 1 hour and 45 minutes in real Earth time.

While the aliens entered our galaxy an occasional Plasma would slip out of the spaceship and enter our planet..  While no one knows when the first plasma landed on earth what we do know is for some reason there has been a huge increase in there sightings. Till now there source of food is the microorganism called a Slug. It is with out no question that when ever there is a Plasma around that they are normally in search for a Slug treat. The Slug treats are said to hold magical powers of laughter and happiness in its purest form. If you ever come across one in your daily adventures you will feel good and know that you are lucky to have witnessed a Plasma, while they have rarely been seen in the last few decades. More info at http://www.plasmaslugs.com/ and you can find Plasma via Instagram.