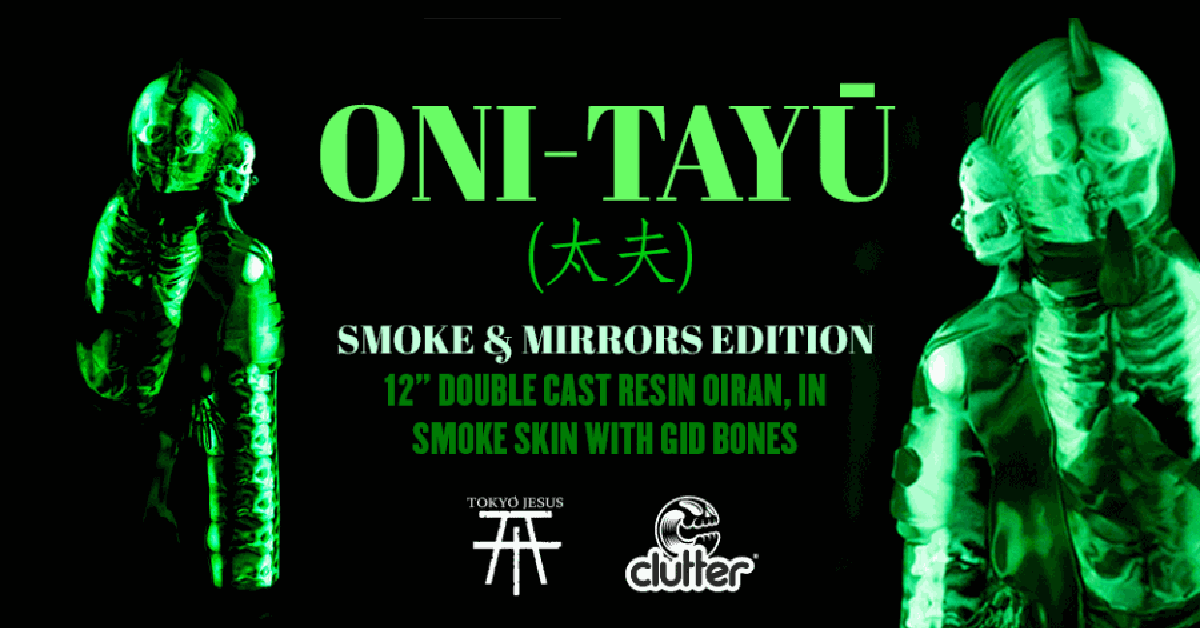 This is one release that I have been waiting to share with you guys, because it is fucking insane. During my time living in New York, I had the pleasure of seeing Oni-Tayū take form over many arduous, sweat-inducing hours at Clutter Studios. The guys at Clutter always strive for perfection, but they transcending even themselves with this release. Oni-Tayū is a thing of absolute beauty that both Tokyo Jesus & Clutter Studios can be tremendously proud of. Now we have release details to share with you!

Releasing on Friday 13th September at 2pm EST (7pm BST), this mesmerizing and dark beauty stands at 12inch and is double cast in a smoke resin skin with GLOW-IN-THE-DARK inner skeleton! They are going to be priced at $350 (about £284) each, which a freakin’ steal when you see the amount of effort, skill & patience that has gone into each of these. You are going to be blown away when you hold this. Truly remarkable.

From the twisted imagination of Japan’s own Tokyo Jesus, comes the Oni–Tayū (太夫) – a high ranking Oiran with a dark secret.

In order to become an Oiran, a woman had to be educated in a range of skills, including the traditional arts of sadō (Japanese tea ceremony), ikebana (flower arranging), and calligraphy. The highest rank of Oiran was the tayū (太夫).

The Crystal Blood Tayū revealed her outer form, while this release showcases her deepest secrets – skeletons throughout.

Sayu (a.k.a. Tokyo Jesus) is a sculptor, painter, and toy designer. The mystifying world of Tokyo Jesus is filled with imagery of skulls and ruined technology. He works in digital and traditional mediums to craft his drawings, paintings, toys, and jewelry.

He lives in Japan with his wife, artist  Eimi Takano.

Clutter Studios is a world-class creative production and design house. With 3D scanning, modeling and printing capabilities, alongside traditional sculpting, solid and roto-cast resin casting, and full factory production, we are here to bring artistic visions to reality.